"Batman" Lenny B. Robinson Stops in STL with Tricked Out Batmobile [VIDEO] 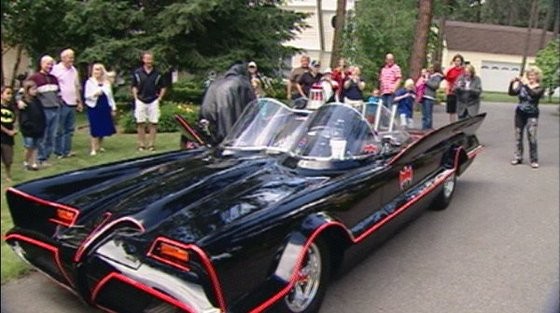 It's not an easy week to be a Batman impersonator. Lenny B. ("as in Batman") Robinson came to St. Louis this week to take his new custom-made, obsessively-detailed real-life Batmobile to visit kids receiving treatment at the St. Louis Children's Hospital. In the wake of a shooting that claimed 12 lives at a midnight screening of The Dark Night Rises, the hospital canceled Robinson's visit.
Robinson has been driving across the country, stopping at hospitals to visit with sick children as Batman and he says he hopes to continue to bring happiness to others, despite the recent tragedy.
Daily RFT found the notoriously reclusive, quirky superhero [impersonator] in the Bat Cave (eh hem, the underground parking garage at the Hyatt Regency) and spoke to him about the shooting in Aurora, his kids, and driving a car that shoots fire but doesn't have A/C (go figure).

Robinson made headlines earlier this year when he was pulled over in one of the most ridiculous traffic stops and greatest viral videos of all time. Maryland's Finest stopped Robinson in his earlier Batmobile, a sleek black Lamborghini Gallardo Spyder, and found him en route to a Washington D.C.-area hospital in a full 40 lbs, leather and neoprene Batman costume.
Robinson hasn't donned the suit since the shooting in Aurora. When asked if he's disappointed that his visit with the STL Children's Hospital was canceled, Robinson says "Batman cannot lie."
"I was very disappointed. My heart was hurt, but I understand," he says. "I may not agree, but I understand. This will not stop me. It's a bump in the road, it's a delay but I'm not going to let it stop me."
A spokesperson for St. Louis Children's Hospital said that after consulting with child psychiatrists on staff, they decided it was too soon after the shooting for a visit from Batman.
When he visits children who ask about the shooting, Robinson says he will be honest. "It was a senseless tragedy, committed by an insane coward. My heart goes out to the victims, families, people recovering in the hospital and Batman fans everywhere," he says, adding that he believes the shooter, James Holmes was a sick, heinous individual who did something senseless.

Robinson says he's still on to visit hospitals in other cities, as he works his way back to Maryland, where he appears as Batman to lift children's spirits. He picked up the new Batmobile in June from the Canadian firm Unique Movie Cars and Props in British Columbia, where it was custom built to a T to resemble the original Batmobile from the 1966 television series.
The Batman obsession started with his youngest son, who has appeared by his side many times, as Robin.
"It would be 100 degrees outside and we'd go to the pool or the grocery store and he'd be in his Batman costume," Robinson says of his son as a child. "And of course, it was always any day except October 31." He added that his kids love that he's Batman and are proud of his charity organization Superheroes for Kids.
After Robinson sold his company in 2007, he was able to put more time and cash into his passion.

The new Batmobile is tricked out with a turbo Ford racing motor. A device in back shoots fire from a propane tank in the trunk but the Bat Ray projector, realistic as it may be, won't actually shut down another car's transmission. Somehow, Robinson managed to score the license plate "4Batman".
Robinson is in town for a couple more days, so listen for the 1966 theme song and keep an eye to the sky. You might see a Bat Signal.