New Tamper-Proof OxyContin Is Getting Users to Switch...To Heroin 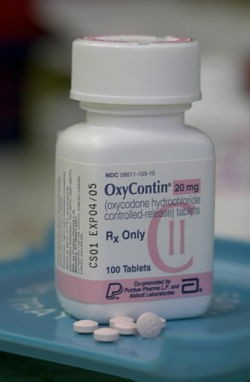 The manufacturers of OxyContin always suspected the pain-reliever was going to be subject to abuse. That's why, when the first version was released in 1996, it came in a time-release capsule that was supposed to prevent a major rush from the drug hitting the brain all at once.

Within 48 hours, there were instructions all over the Internet about how to crush the capsules to make them easier to snort, or mix their contents with liquid to make them easier to inject, and OxyContin went on to become the most abused prescription drugs of the late 90s, favored by the likes of Rush Limbaugh.

Two years ago, OxyContin developed a new, crush-proof capsule. You couldn't snort it. If you tried to mix the contents with water, they would turn into a gel that was impossible to shoot up. Almost immediately, the number of OxyContin abusers went into a sharp decline. Problem solved!

Except, as Theodore Cicero, a professor of pharmacology in psychiatry at Washington University Medical School discovered, they weren't quitting drugs. Instead they were switching to other opiates, notably heroin.

"The most common analogy is of a balloon," Cicero explains. "If you depress it in one area, it will pop up in another area. The volume is not going to go away."

Starting in the summer of 2009, Cicero and his team collected data four times a year from 2566 patients in 150 drug rehab centers across the country. Each patient was asked to fill out a survey anonymously about his or her drug use in the past 30 days. From that pool of patients, 103 agreed to do interviews over the phone or by e-mail.

At the start of the project, 35.6 percent of the patients reported that OxtContin was their primary drug of choice. By May of 2011, 21 months after the release of the new and improved OxyContin, that number had plummeted to 12.8 percent. During the same time, the number of patients who preferred heroin nearly doubled, from about ten percent to twenty percent.

It may not seem like much, but, says Cicero, "it's a big number because there are so many OxyContin users."

That opens up a whole other issue. "OxyContin had a lot of popularity because it was a known commodity," Cicero explains. "The capsules were clearly marked. The authenticity was guaranteed. It came from a doctor's prescription. It was a legal medicine, highly pure and predictable.

"Heroin," he continues, "is a powder, and it's rarely pure. Dealers cut it with quinine and additives. Its purity is sometimes only five percent, depending on the area. That's unexpected for a person used to using prescriptions."

That's not to say all OxyContin users have switched to heroin. A far greater percentage reported that they started using other prescription opioids. But in recent years, heroin has taken on an added allure.

Due, in part, to the popularity of OxyContin, heroin dealers had to make adjustments over the past few years in order to compete in the free market. "Heroin is the purest it's been in a long time," Cicero says. It's also cheaper, running for as little as $5 or $10 on the street, while OxyContin costs $1 per milligram. (A typical dose is 80 mg.)

So switching from OxyContin to heroin makes a twisted sort of sense. Cicero believes this may also be the reason for the increase in heroin overdoses over the past couple of years.

"The pool of users is not going to go away," he says. "If you decrease the use of one opiate, it will pop up somewhere else. The government policy has been to limit the supply of drugs, thinking that if you reduce the supply, the demand will go away. It's a failed policy. We need to work on the demand side. If we reduce the demand, the supply will take care of itself."

He doesn't blame the manufacturers of OxyContin for the shift in drug use. "It's unrealistic to expect drug companies to undertake this on their own. If we make all present opioids abuse-deterrent, it will decrease the abuse, I think, but I don't know how overall usage will shift."

Cicero and his colleagues Matthew Ellis (at Wash. U.) and Hilary L. Surratt (at Nova Southeastern University in Coral Gables, Florida) published their findings in the form of a letter to the editor of The New England Journal of Medicine instead of a full-fledged paper. "We wanted to alert the public as quickly as we could," Cicero explains. But he promises further research will be forthcoming.