Is Rep. Genise Montecillo's Ex-Husband Joe Montecillo Running for Office to Harass Her?

The strange drama that's unfolded in the Democratic primary of Missouri's 93rd House district has stayed behind-the-scenes, but almost became public on Wednesday, March 21.
On that day, after a lunch recess, Representative John "JJ" Rizzo (D-Kansas City) returned to his seat in the chamber. Desks in the House are arranged in pairs; last session, Rizzo's seatmate was Genise Montecillo, a fellow Dem from the 66th district in St. Louis.
Despite the age gap -- she was 49, and Rizzo, 31 -- they'd both been elected as freshmen in 2010, and had become friends. Montecillo was a former special-ed teacher who'd already cemented a reputation in the caucus as a professional, hard-working member of the budget committee. But on that spring afternoon, Rizzo could see something was wrong with her.
"I can tell you she was visibly shaken and concerned for her safety," Rizzo recalls. "I'd never seen her react like that."
Montecillo had just received word that a man was spotted in downtown Jeff City: Her estranged husband Joseph Montecillo, a one-time assistant city counselor in St. Louis and Brown & Crouppen lawyer who currently practices at the Klar, Iszak and Stenger firm in Richmond Heights. The couple was separated with only sporadic contact. But on that day, Joe was present in the capital, and  -- thanks to the quirks of redistricting -- was filing to run for state rep in the district adjacent to hers.
Genise grew so upset, Rizzo remembers, she excused herself. "On the House floor, you're in front of cameras," he explains. She headed to a break room to collect herself.
Within hours, records show, Genise was in the Cole County Sheriff's Office filing a petition for an order of protection against Joe.
"I believe he has tracked me through my car and phone as he's known my whereabouts," she wrote in longhand. "I believe he had my bedroom bugged....as he later revealed phone conversations in detail."

She sketched out more background in her petition: Once she was elected in 2010, she wrote, Joe wanted a government job and "became very agitated" when she failed to deliver one, frequently screaming at her and berating her.
Genise moved out of their Affton home in December 2011 and into an apartment (Joe kept the house). After that, she said, "things settled for a while," then he sent her "multiple e-mails." She alleged that one night, when she declined to respond to several of his texts, he called the Missouri State Highway Patrol to report that a state rep was missing -- even though he knew she was safe.
"While he has never physically harmed or threatened to physically harm me," she wrote, "his behavior has become increasingly erratic and unpredictable as our relationship has deteriorated....now I fear for my safety."
Joe Montecillo tells Daily RFT that soon thereafter, he was served papers of a restraining order at six in the morning, which "frustrated" him. However, he believes that their separation had been civil. He repeatedly insists that his ex-wife (they're now officially divorced) is "a wonderful state rep and a very good person," not to mention someone of high integrity.
So does that mean we should believe what's in her petition?
"I don't know why she filed it," he responds. "I would say categorically I'm not doing this to stalk her and threaten her. I wouldn't get into this kind of business to have vengeance on an ex-wife. I'd have to be a pretty unstable person to do that, and I don't think the history shows that [I am]."

He says that he and Genise actually met while working together on the 2004 elections, and were married in 2006. He served as her treasurer when she ran for office in 2010, and he's been involved in district-level politics throughout these years.

He acknowledges that his running for office in the district right next to his ex-wife's is "an unusual twist that you don't see everyday," but says, "I didn't think it would be a problem. People can cooperate after a divorce."

The Democratic establishment did not agree.

Six days after Joe Montecillo filed to run for 93rd district rep, something he predicted would happen did, in fact, happen: Incumbent Democrat Scott Sifton withdrew from that race and set his sights on a senate seat, thereby clearing the way for Montecillo to win the primary unopposed. 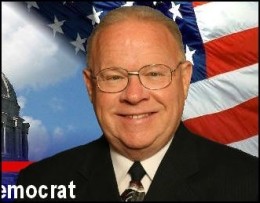 That's when the phone of Bob Burns blew up.

"I started getting bombarded with phone calls," says Burns, a 64-year-old retired beer distributor and union member with experience as a staffer to Congressman Dick Gephardt and Senator Claire McCaskill.
"Democratic reps in the state, particularly around here in the St. Louis region, called me and said, 'We can't have Joe come down here. It'll cause too much turmoil. Genise is a valuable member of the caucus, she's very good on public education, we can't take a chance on losing her.' I was asked to run for this."

Some will even go on the record with their view of the matter. Says Rep. John Rizzo: "I've never met [Joe Montecillo], but it seemed to me that it was more of a vindictive move on an ex-husband's part than someone who wanted to help a community, or any other legitimate reason you would get into politics."

At first, Joe Montecillo blamed his wife for the powerful groundswell against him. So he filed his own order of protection against Genise in St. Louis County on March 4.

He accused her of "coordinating and encouraging repeated efforts and communication to suppress my right to run for elected office and intimidate me to not run." He filled out a checklist, claiming that Genise criticized him, made threats, and acted possessive of him "once a day," and stalked/harassed him and spied on him "once a week."

He voluntarily dismissed this action on May 1; he says he'd felt attacked by third parties for filing it, and preferred to concentrate on his campaign.

Rep. Genise Montecillo -- who is now busy with her own campaign for re-election in the 66th district -- tells Daily RFT that she let her own petition against Joe drop last Tuesday only because her husband had agreed through attorneys to leave her alone. She declined any further comment.

Meanwhile, Joe continues on in the 93rd district primary.

"I'm staying in the race because, first, a lot of good people have already gone to bat for me and it would be too late to back out. And secondly, I'm not going to back out for someone who's been put into office by so-called 'leaders.' As corny as it sounds, I think the people should decide who serves."

Sally Hodges, committeewoman for the Progressive Democrats of Lemay, agrees. She resents what she considers outsider meddling, and claims Joe has support from her and from her counterparts in Oakville and Tesson.
"Those people endorsing Bob are not from this area," she complains. "They don't even know Joe. Joe's a good man, and he takes pride in this area. I think Joe is a punching bag and I don't like it at all."
So far, Joe Montecillo has raised $7,916, according to finance reports filed this week Montecillo says that if elected, he'd champion labor rights and neighborhood development (we had to ask, because the "Issues" part of his website is blank).

His establishment-backed opponent, Bob Burns, has drummed up a larger sum of $11,206. Burns says he'd focus on job-growth, public education and access to healthcare. He initially thought he'd only want to serve only one term, but after going door-to-door in the summer heat (and losing 30 pounds in the process), he says he's become "reinvigorated."

"One thing I'm hearing is that [the people] are tired of the partisan bickering and fighting and they want someone who can go down there and work for the greater good," he says.

Seems like there's a bit of fighting within the party, too.