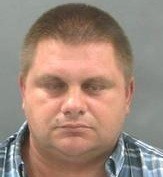 A 27-year-old woman told police she was out with a friend at 7 p.m. Thursday night in the 4200 block of Gustine Avenue when a man approached her. He allegedly flashed a badge, told the woman she was trespassing, and handcuffed her. The man told her he was a St. Louis County Police officer, and told the friend to leave.

At which point the "officer" took the woman behind the building and raped her.

On Monday, that man was identified as Andrey Levkovsky, 45. Authorities do not believe him to be a police officer. Levkovsky was charged with forcible rape, forcible sodomy, armed criminal action, impersonating a law officer and kidnapping.