Ed Martin's Pledge to Thwart Obamacare From His "First Minute in Office": Will It Resonate?

What democratic AG Chris Koster did do was file a brief last year on Missouri's behalf in one of the three feeder cases that became the single landmark Supreme Court case upholding the Affordable Care Act. 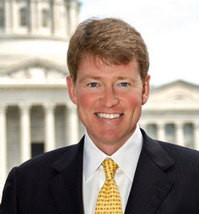 Koster -- a Democrat -- wrote at the time that he felt compelled to file the brief because Missourians had rejected the legitimacy of the individual insurance mandate in a 2010 ballot referendum (which brought federal and state law into conflict).

In his brief, Koster adopted conservatives' main argument against the ACA: That the individual mandate was an unconstitutional broadening of Congress' power to regulate interstate commerce. However, Koster did suggest -- in a lukewarm fashion -- one way the Supreme Court might salvage the law: Refer to the money that an insurance-resister must pay as a "tax" instead of a "penalty."

Which, as you know, is precisely the position that Chief Justice John Roberts took in his tie-breaking decision to uphold the ACA.

None of this will matter if Koster crushes it in the upcoming AG election, but we're left to wonder: Is Ed Martin echoing the view of most Missourians? What do they think about the ACA, now that the Supreme Court has signed off on it?

Daily RFT couldn't find any recent polls on the subject that break out a Missouri component, but a Washington Post - ABC news poll suggested the Americans may be accepting the law because they're now evenly divided over it, in contrast to the widespread disapproval that reigned before the high court's hand-down.

Of the folks who still don't like the ACA, only about two thirds want to repeal all or parts of it, as Ed Martin so vehemently wants to do.

If Missouri truly is a bellwether state, then Missourians may be ready to move on from this debate -- leaving Ed Martin's appeal to fall on unreceptive ears.