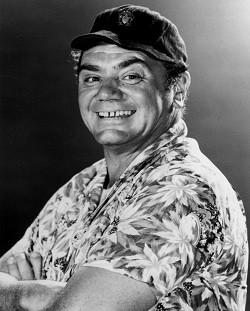 Academy Award winning actor Ernest Borgnine passed away this weekend at the ripe old age of 95. He starred in hundreds of films in a career that stretched to seven decades, but to me he'll always be Cabbie, the musical-theatre loving lug of a cab driver in John Carpenter's Escape from New York. And maybe also Mermaid Man, from SpongeBob Squarepants. It's a tough call which of those two projects are better, but let's say it's Escape from New York because it was filmed in St. Louis, at least in part.

Back when he was a spry 91, Borgnine shared the secret of his longevity with some talking haircuts on Fox News. Footage after the jump.

It's good to know that in addition to working apparently non-stop for 60-something years, Borgnine also had a hobby.