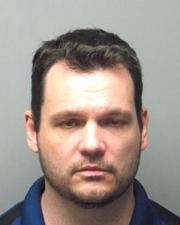 Kirk Michael Jackson, 38, operated Atlas Massage Therapy in St. Charles. Back in March he was charged with videotaping clients while they undressed at Atlas, a hobby police believe he had been pursuing for more than a year. During a search of his home, St. Charles Police found several DVDs and CDs filled with numerous women undressing, many of them in locations other than Atlas Massage Therapy.

Apparently police continued to work the case, as the St. Louis Circuit Attorney has now issued a warrant against him for allegedly filming unknowing women in St. Louis City.

According to the probable cause statement, Jackson was hired as a contractor by Gateway EDI. While performing massages there, he's accused of filming two women without their knowledge or consent while they were changing clothes.

So in addition to his massage oil and towels, Jackson apparently brought his camera with him while working freelance. Creepy. Where else did he take his camera?