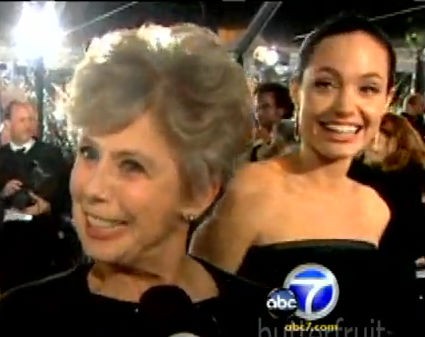 Earlier this week, a letter written by "Jane Pitt" of Springfield in the News-Leader caused a minor stir. At first, the paper confirmed that, yes, it was Brad Pitt the Famous Actor's mother Jane. Then it retracted that. Then yesterday they retracted the retraction.

"To clear up earlier confusion," reads a new Editor's Note, "the News-Leader has verified the letter writer is the mother of actor Brad Pitt and local businessman Doug Pitt."

Despite the confusion, Jane Pitt was crystal clear about her feelings on gay marriage throughout.

The doyenne of the illustrious Pitt clan was responding to a column opining that Christians could not vote for Mitt Romney because he is Mormon. Mrs. Pitt strongly disagreed.

I think any Christian should spend much time in prayer before refusing to vote for a family man with high morals, business experience, who is against abortion, and shares Christian conviction concerning homosexuality just because he is a Mormon.

Any Christian who does not vote or writes in a name is casting a vote for Romney's opponent, Barack Hussein Obama -- a man who sat in Jeremiah Wright's church for years, did not hold a public ceremony to mark the National Day of Prayer, and is a liberal who supports the killing of unborn babies and same-sex marriage.

Uh, thumbs up for open-mindedness on religion?

Since its printing, the letter has gone viral, showing up on Buzzfeed and the Huffington Post. The fascination centers around the fact that Brad and Angelina Jolie at one time famously promised not to marry until same-sex couples could as well. Brad Pitt also donated large sums to the anti-Proposition 8 marriage amendment front in California.

The small celebrity artifact shouldn't come as a huge surprise -- it's no secret that Brad was raised in a very religious Southern Baptist household. He broke away from his parents' convictions long ago, declaring himself an agnostic/atheist. Sometimes the very handsome apple falls far from the tree.

Despite their differences, one can only wonder if Brad will come out swinging now that Jane is being criticized in gossip blogs the world over. After all, he's just a simple Midwestern country boy. And you don't mess with our mommas.