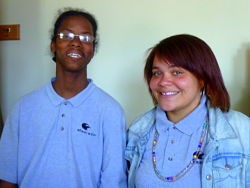 Shearwater High School, a charter school for high-school dropouts, opened in August of 2010 on the campus of Ranken Technical College. This morning it will celebrate its first nine graduates in a ceremony at Saint Louis University.

All of this year's graduates, save one, have been taking classes at Shearwater since the school opened. In order to graduate, they had to meet the Missouri state graduation requirements and pass the GED, says Stephanie Krauss, the school's founder, president and CEO.

But for Krauss and the students, graduation means much more than that.

"These students are nine examples that this works," Krauss says. "They would not otherwise have been in school. They have an opportunity to have choices in adulthood."

The majority of the graduates will be going on to some form of college. One opted for the military, and another plans to join the union.

Krauss believes these nine can be an inspiration for other dropouts who are considering returning to school. "Kids can say, 'There's not much difference between me and Ashleigh. I can do it, too.' They can look at the progress these students have made and see themselves as graduates."

The Shearwater faculty and staff -- consisting of four teachers, two social workers and a special education coordinator, in addition to Krauss and her administrative team -- have done their best to accommodate students. Instead of conventional sixteen-week semesters, the school year is divided into four- or six-week sessions, both to maintain student interest and so, if a life crisis arises, students can take time off without missing too many classes.

The curriculum itself is designed so that students can move at their own pace. A student remains at a certain level not for a predetermined length of time, but until he or she has mastered the material. Some students remain at Shearwater for three years. Others get through the program in two.

Many incoming students are frustrated by their lack of progress. "Students are so far behind, but they think they're on track," Krauss says. "They have an inflated sense of expectations. They think they're going to graduate in three months." Most of the students, in fact, arrive at Shearwater working at the elementary-school level in both reading and math.

Even so, much to Krauss's regret, there have been many students who didn't make it to graduation. Some aged out of the program -- after a student turns 21, he or she is no longer eligible for a free high-school education. For others, life just interfered.

"We've lost a lot of highly-motivated students," Krauss admits, "mostly girls who got pregnant or had to take care of their families and left as a result. It breaks my heart that these incredibly smart and resourceful young people can't stay here. We want Shearwater to serve these kids, too."

And so Shearwater remains a work on progress. Next week, Mike Hylen joins the staff as the school's first principal. (Previously, he spent fifteen years as an administrator in the Rockwood School District.) In October, Krauss will start a pilot program for evening classes for students who have jobs or other responsibilities that keep them from going to school during the day. Eventually, she hopes this will expand into a full-fledged GED course for students who are too old or feel too mature for high school. (Krauss is looking for certified teachers to volunteer to teach the six-week sessions.)

There are usually between 100 and 150 students on Shearwater's waiting list. Of those, Krauss estimates that only about 25 will have what she calls the "grittiness factor" to buckle down and do the work necessary to get through school. Krauss emphasizes that students need to be self-motivated, not forced back to school by relatives or parole officers.

"It takes a lot of dedication," says Roseman. "You have to be able to obey the rules and the dress code."

"You have to come here every day," adds Foster. "Even if you're in a bad mood, you still have to learn."

For Krauss, the fact that nine students have made it to graduation is a sign that she's doing something right.

"These students are building a collection of stories," says Krauss. "I do believe that there are a lot of smart kids who aren't in school who want to believe. Our graduation is a marker that we're getting these kids ready. It's a defining moment of living out our mission."