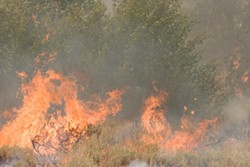 The hot, dry summer means conditions are perfect for wildfires -- see Colorado, for example -- and now Missouri has its own blaze crackling in the Mark Twain National Forest. KMOX reports that the fire first attracted attention Thursday just after 10 a.m., and now three dozen firefighters from area departments are working to put it out.
And you thought your office was hot. Try slinging a shovel at noon while wearing protective clothing in the middle of a 500-acre inferno.
You can follow the firefighters' progress online at the National Interagency Fire Center. Today's situation report states that the Mark Twain fire exhibits "active fire behavior with short crown runs, torching and spotting." The fire was 0 (zero) percent contained at the time of this morning's report.
Nationally, 52 fires have consumed more than 900,000 acres. That number includes the 13 new large fires that developed yesterday. Maybe it'd be a good idea to forego this year's annual Independence Day bottlerocket war.