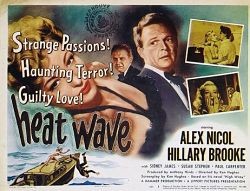 The National Weather Service predicts that the temperature will hit 108 degrees this afternoon. That's only a few degrees hotter than 105, which we've lived through plenty of times, but 108 seems more significant somehow, maybe because the last time it was ever this hot in St. Louis was back in July of 1954.

What does 108 degrees feel like? We went to the Missouri History Museum Library and Research Center (incidentally, a very nice, cool place) to find out.

These jokes are all courtesy of LeRoy Walls, who had the misfortune of living on a farm in the Ozarks during that summer with only a ten-inch electric fan for cooling. He chronicled his experiences for all posterity in the Ozarks Mountaineer magazine in the 1980s. Even at a remove of 30 years, his memories of the heat were especially vivid.

We watched several storms come close enough to generate a breeze that turned the white oak leaves inside out. These just left us more disappointed as they passed by our farm leaving a few drops of rain. The ground was so dry that it cracked like the finish on our old Ivers and Pond piano....The corn crop was so bad, some said you could eat several acres of corn in one meal.

When the crops failed and all the pastures, ponds and wells dried up, Wells's father ended up taking a job in St. Louis, leaving his oldest son, Wells's brother Keith, to run the farm.

Things were slightly easier in St. Louis where, reported the Globe-Democrat, people had air-conditioning and window fans to help them cool off -- unlike the last horrible heat wave in 1934, when the thermometer hovered above 100 degrees for eight straight days, reaching a high point of 110.2 on July 24, and 217 people died.

Thank goodness for modern conveniences, because July 14 was, proclaimed the G-D, "the hottest day in all of history." The temperature reached 112.3 downtown and 115 at Lambert. Amazingly, this wasn't the hottest place in Missouri. That would have been Warsaw and Union, both of which posted temperatures of 117, still a state record. And East St. Louis set the record for Illinois that day, also 117. (Is there really a significant difference between 112.3 and 117? Not that this is something we'd be that interested in finding out.)

That day, a University City Weather Bureau observer named Jack Frohlichstein "reported that for curiosity he put a trusted thermometer in the rays of the sun in his front yard. It got up to 150 degrees." That's about the temperature of a well-tended barbecue pit.

At St. Elizabeth's Hospital in Granite City, nurses couldn't get their thermometers to register temperatures lower than 105 degrees, reported the Edwardsville Intelligencer.

"Even Yuma, Ariz., in desert country, was cooler than St. Louis with a mere 102," the G-D complained.

During the 1954 heat wave, the St. Louis Chronic Hospital went through four tons of ice and the citizens of St. Louis pumped 278,700,000 gallons of water on July 13 alone. (The county pumped another 79,000,000 gallons that same day.) Some poor souls in southeast St. Louis had no water at all because their two water mains ran dry. For two days running, St. Louisans used 1,204,000 kilowatts of electricity, a new record. Remarkably, though there were a few flickers, the G-D reported no blackouts.

In Belleville, the heat caused the rails on the Southern Railway to buckle, derailing 29 freight cars.

In order to beat the heat, office buildings let pedestrians hang out in the air-conditioned lobbies. Many businesses shut down and sent their workers home at noon. Swimming pools stayed open 24 hours. If anybody resorted to sleeping in Forest Park, as people did during heat waves earlier in the century, the G-D did not report it. Fans and air-conditioning were much more effective anyway; though nineteen people died from the heat on July 14, 1954, it was a significantly smaller number than during the 1934 onslaught.

Tempers were short. The Globe-Democrat reported this bit of potential violence:

A postcard said the writer was going to see his Congressman about getting a new Weatherman if the heat doesn't stop.

By July 16, though, the temperature had dropped to a mere 92 degrees at 4:30 p.m. Noted the Post-Dispatch: "The cold front from Canada turned out to be better than anticipated."

It wouldn't last. Five days later, with the temperature back up to around 110, the heat took its toll. At Busch Stadium, a nasty fight broke out between the Cardinals and the Phillies after the Cards, managed by the appropriately-named Eddie Stanky, were ordered to forfeit the second game because of unnecessary delaying tactics. Reported the Chicago Tribune: "Both teams swarm[ed] onto the field swinging, punching and wrestling in one of the worst riots in St. Louis baseball history."

But that is another story.