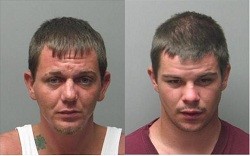 According to police, Dustin Maas, 30, and Matthew Haney, 23, both have heroin problems. The major issue for any heroin addict is getting more heroin, which requires money, which often leads the addict to crime.

And so when Maas and Haney saw an empty truck with its engine running parked behind a St. Charles Red Roof Inn after 3 a.m. Wednesday morning, the pair allegedly figured they could steal the truck and make a quick fistful of money.

What they didn't know was that the cargo bay of the truck was packed with tiny passengers.

The truck was still running so that it could power its refrigeration unit, which was keeping alive its precious cargo -- 2,000 mice destined for medical research, with a cash value of $10,000.

Police say someone at the Red Roof Inn witnessed the duo breaking out the window of the truck and driving off, presumably to that mythical ranch in California where they'd finally be their own men. Little did they know that the truck could be tracked through its GPS, which resulted in them only getting away with the crime for about 20 minutes before the police pulled them over. Maas has been charged with felony vehicle theft, while Haney has been charged with tampering, a misdemeanor.

The mice escaped injury -- which means they'll end up in a lab somewhere. But then the best laid schemes of mice and men gang aft agley.