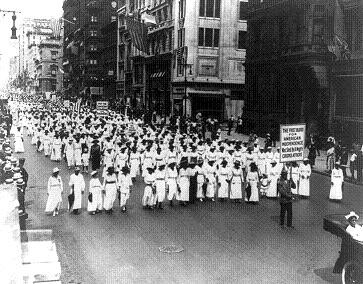 Yesterday,  thousands marched down Fifth Avenue in New York City to quietly protest perceived racial profiling in the NYPD's stop-and-frisk policy. Organizers say they made a conscious effort to mimic something that happened there a century ago: The silent march that took place in the wake of the 1917 East St. Louis riots.

Times were, shall we say, a little different back then.

According to a historical website maintained by the University of Michigan,


Whoa. The article goes on:


Across the country, people were aghast at the violence. On July 28, 8,000 African Americans, primarily from Harlem, marched silently down Fifth Avenue. They were dressed in their finest clothes and marched to the sound of muffled drums. They carried picket signs while thousands of New Yorkers watched from the sidewalks. The children marched as well as the adults. Some of the banners read: "Mother, do lynchers go to heaven?" "Mr. President, why not make America safe for democracy?" "Thou shalt not kill." "Pray for the Lady Macbeths of East St. Louis." "Give us a Chance to Live."

Keep in mind, by the way, these folks had the courage to do this decades before the civil rights movement.  Nobody was arrested.

By comparison: The Sunday protestors (led by Al Sharpoton) were marching against what they considered an unjust police policy, not murder and lynching, but still couldn't contain themselves, according to HuffPo:


Several scuffles broke out between screaming protesters and officers who pushed them behind barricades. One woman was seen wrestling with an officer who had leaped across a barricade, chasing her before she was arrested. Police said nine people were arrested on various charges including assault, disorderly conduct and resisting arrest.