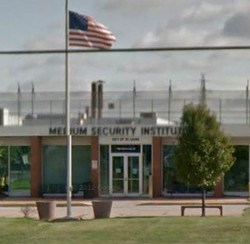 Two corrections officers have been charged with setting up a beating at the city's Medium Security Institution.

It started when the officers, Elvis Maurice Howard and Dexter Brison, arrived at the cell of an inmate identified only as "T.D." with an unusual offer.

According to the St. Louis Circuit Attorney's office, Howard and Brinson asked if T.D. would be interested in fighting "the person in cell 50."

According to court documents, here's how it went down: Brinson and Howard approached T.D. during a time when no prisoner movement was allowed. They cuffed him and escorted him up one level to cell 50, whose occupant is identified as "D.R."

D.R. was sitting on his bed when the door suddenly opened. T.D. entered and started punching him in the face. D.R. grabbed T.D.'s shirt and managed to tear it down the middle, but ended up with a black eye and bruises all over his face. After a minute, Brinson and Howard opened the cell again, and let T.D. out.

Surveillance tapes show Brinson and Howard placing T.D. in the cell, and T.D.'s cellmate was able to watch the fight from their cell one floor below.

The incident was reported by a fourth inmate who asked to remain anonymous. D.R. told investigators that there was no point in tattling on the guards since the "staff allowed it."

Both Brinson and Howard have been charged with assault in the 3rd degree, obstruction of government operations, and burglary in the 1st for "knowingly entering unlawfully" D.R.'s cell. Read Brinson's probable cause statement here, and Howard's here. Both men are currently in custody at the St. Louis City Justice Center.

Both men are on forced leave from their jobs. A woman identifying herself as Brinson's wife declined to comment under advice from their attorney.