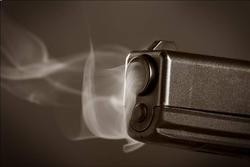 St. Louis Police were called out to investigate two shootings at 11:30 p.m. Friday night in different corners of the city. In the first incident, they headed to the 5900 block of Goodfellow Boulevard in the North Pointe neighborhood. They found DeWight Patton, 33, seriously injured and laying in the street. Patton was taken to the hospital, where he died from his injuries Saturday morning.

At just about the same time, police were summoned to the 1900 block of St. Louis Avenue in the St. Louis Place neighborhood. Lance Abernathy, 38, was the victim in this incident, dead at the scene from a gun shot wound to the head.

Police have no suspects at the moment in either case, but both investigations are open.