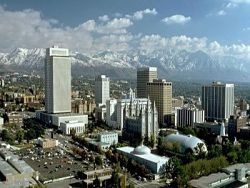 The Boys at the Bar is not Up in the Air. It does not star George Clooney. It does, however, feature the prolific actor Bo Hopkins, a Playboy Playmate, Crystal the Monkey from The Hangover Part II and the Sassy Gay Friend of YouTube fame. More significantly, while Up in the Air required St. Louis to stand in for Omaha, Detroit and northern Wisconsin, St. Louis is The Boys in the Bar's leading city.

Unfortunately, except for exterior shots, St. Louis will be portrayed by Salt Lake City. WTF?

The decision to film by the Great Salt Lake instead of the Mississippi was a matter of expedience, explains Mia Tate, one of the movie's producers. Since most of the cast and crew were based in Utah, and since the entire budget was $150,000, it made more sense to save on travel expenses.

"Originally it was going to be set in San Francisco," says Tate, "but the director, Richard Dutcher, had a revelation that it should be in St. Louis. It's more the heart of America. It's charming, but not overdone."

Dutcher, it so happens, is a native of Mount Vernon, Illinois, about an hour east of here, and has done a fair amount of time in St. Louis bars. "I thought it would be great," he says. "I can count on one hand the number of films shot in St. Louis. Up in the Air. And that one with Susan Sarandon, what was it? White Palace?"

The Boys at the Bar, as you might expect, takes place in a bar, over the course of a single night. "I like to describe it as the best night you ever spent with your friends," Dutcher says. "A group gets together to celebrate somebody's birthday at the community pub. It's a celebration of American humor. It's filled with jokes and limericks, classic jokes, naughty jokes, clean jokes. I had noticed talking with younger people -- I'm in my mid-forties -- that something had been lost, the tradition of sitting around telling jokes. They didn't have any. They just talked about the funny thing they'd seen on TV or a song they'd heard on YouTube. I was afraid the old-fashioned joke was getting lost."

(When asked to give an example of a good, old-fashioned joke, though, Dutcher demurs. "My jokes are really long, the kind that start with King Arthur.") 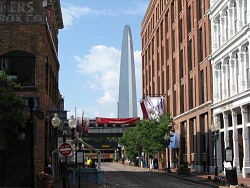 Dutcher's fictional bar is on Laclede's Landing (probably); he'll be coming to St. Louis sometime in the next six weeks to scout and shoot exterior locations. But the interiors were all shot over the course of eight very long nights in a former Hard Rock Cafe turned comedy club in Salt Lake City, which the production was able to use for free. "It looks like it belongs in St. Louis," Dutcher says reassuringly. "It's got a lot of old brick and brass."

For verisimilitude, the crew imported Budweiser signs, Cardinals jerseys and other baseball paraphernalia, a photo of the Arch and a Riverfront Times news box fully stocked with papers. (Dutcher promises that the RFT is clearly visible in several shots.)

"The difficult part was getting the alcohol in Utah when you're not a bar and don't have a liquor license," Dutcher confides. "We ended up importing it from Wyoming."

The entire Boys at the Bar project is a master class of sorts in film production, taught by Dutcher, who has produced and directed seven previous features. Twenty-three students, including Tate, raised the money and produced the film together. "It was an amazing experience," she says. "It was a group of people all learning and coming together. By the end of shooting, we were all a little delirious. It added to the entertainment value."

Once Dutcher finishes the exterior location shooting, the film still has to be edited. Tate estimates that it should be done in time to meet the submission deadline for Sundance -- though not, alas, for the St. Louis International Film Festival.

"We hope to do one of our premiere screenings [in St. Louis]," says Dutcher. "I hope people are really delighted by it. I wish we'd had the budget to shoot the whole thing there."