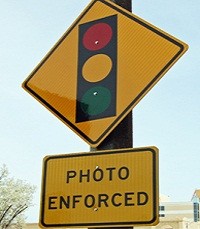 To date, the Simon lawyers are 0-3 in their quest to banish the cameras in a half-dozen municipalities. The latest defeat occurred last week when a Jackson County judge dismissed a class-action lawsuit filed against Kansas City and red-light-camera vendor American Traffic Solution, ATS.

"The Court finds the arguments set out in the defendants' (American Traffic Solutions and The City of Kansas City) motion the most persuasive, and adopts them in coming to the conclusion that defendants' motion should be ... granted."

ATS spokesman Charles Territo tells Daily RFT that the Arizona-based company is pleased that three of the class-action lawsuits have been dismissed and is confident the three remaining cases will get dismissed as well. In March a St. Louis County judge dismissed a class-action suit against ATS and Creve Coeur's red light cameras. In May another St. Louis County judge dismissed a similar claim against Florissant and ATS. Class-action suits against Ellisville, Hazelwood and Arnold continue to wend their way through court.

"At some point opponents of safety cameras in Missouri are going to realize what people in other states have realized, that red light cameras are legal and constitutional," says Territo.

Last fall the Missouri Court of Appeals upheld the constitutionality and legality of another red-light-camera lawsuit filed against Creve Coeur, and the Supreme Court denied to hear an appeal of the ruling.

Territo notes that judges have ruled in favor of red light cameras in the vast majority of lawsuits filed in Missouri -- the glaring exception being a February ruling that voided St. Louis' red-light camera ordinance. That ruling found that the city's camera ordinance violated state law because it was created without enabling legislation from Jefferson City. Judge Mark Neil also ruled that the city violated due process in the way it mailed citations to motorists.

The city is currently appealing the ruling.