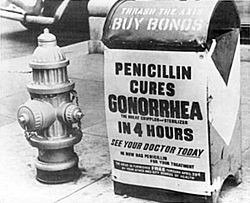 There was much rejoicing last fall when the Center for Disease Control and Prevention released its annual report on sexually-transmitted diseases ranking the prevalence of the disease in U.S. cities and St. Louis came in at number 12. Yes, 12! All the way down from number 1 from the 2007 report. The number of cases had dropped significantly, too, since that annus mirabilis: 4,137 in 2010, from 6,547 in 2006.

The World Health Organization announced Wednesday that its scientists had discovered a new strain of gonorrhea, a supergonorrhea, immune to the regular antibiotic treatment that has reliably squelched the disease in the past.

Cases of supergonorrhea have so far appeared in Australia, France, Japan, Norway, Sweden and the United Kingdom. The WHO isn't sure yet how far it's spread. Some of the nastiest cases in the U.S. still seem to be responding to the antibiotics, but the WHO warns that Americans are just as susceptible as anybody else. (Shocking news, that.)

"If the resistance is there, what we think is that we're sitting at a tip of an iceberg," Dr. Manjula Lusti-Narasimhan, a WHO scientist said in a statement. "For places in many other parts of the world where there are much less both human and financial resources, it's very difficult to know the extent of the data."

The WHO notes that it's pretty common for bacteria to develop resistance to antibiotics, and that gonorrhea bacteria in particular are tough little buggers, which probably explains why the disease is so widespread. (It infects about 106 million people worldwide every year.)

The WHO has no other advice to give, except for taking the usual precautions -- wearing condoms and getting tested if you start to see any weird little sores.