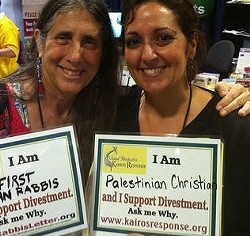 Sandra Tamari, a Glen Carbon mother of two, had just touched down May 21 in the Tel Aviv airport when she says she was detained by Israeli security.

A Quaker Christian of Palestinian descent, Tamari was traveling with a religious delegation called Interfaith Peace Builders that planned to spend two weeks traveling Israel. Afterward the 42-year-old Tamari planned to attend her cousin's wedding in the West Bank scheduled for this coming weekend.

Instead, Tamari's stay on Israeli soil lasted fewer than 24 hours, much of that time spent under interrogation with Israeli security demanding access to her email account. But what was most galling about the ordeal, says Tamari, is the way she was treated by the U.S. Embassy in Israel.

"When I called to tell them what was going on, they asked me whether I was Jewish. When I said no, they said there was nothing they could do," recalls Tamari, who was born in the U.S. and is a full citizen.

Back in the United States -- after spending the night in a holding cell in the Tel Aviv airport and being placed on an early morning flight out of the country -- Tamari contacted an Associated Press reporter who covers the State Department in Washington. The reporter brought up Tamari's case during a press briefing last week. A State Department spokesperson responded that he had no answer as to why the U.S. Embassy asked about Tamari's religion.

Then, this week, the AP's Jerusalem Bureau came out with an article suggesting that Tamari's treatment isn't all that unusual, especially when it comes to Israeli security demanding access to email accounts. The story quotes Tamari and another female American detained at another time who -- unlike Tamari -- allowed security to view her emails. That woman was deported nonetheless.

In a cyber-age twist on Israel's vaunted history of airport security, the country has begun to force incoming travelers deemed suspicious to open personal email accounts for inspection, visitors say. Targeting mainly Muslims or Arabs, the practice appears to be aimed at rooting out visitors who have histories of pro-Palestinian activism, and in recent weeks, has led to the expulsion of at least three American women.

Given what has happened to other Americans who allowed security to sift through their emails and social media accounts, Tamari tells Daily RFT that she's absolutely confident she made the right decision to refuse her interrogators access.


[Continued from previous page.] "The whole process is set up to intimidate and scare away Palestinians from visiting their ancestral homes," says Tamari, an active member of the St. Louis Palestine Solidarity Committee. "It's part of a much larger system to divide people and keep them apart."

Tamari says she expected to be questioned upon entering Israel after co-authoring an op/ed column last month in the Tampa Bay Times that called on Methodist leaders holding a conference in Florida to divest church funds from multinationals companies "profiting from the Israeli occupation" of Palestine.

Prior to last month's failed journey to Israel, Tamari had made it to the Promised Land on at least four other occasions, most recently in 2009.

"My activism and online record of activism was the difference this time," she says.

Tamari estimates that the deportation cost her $4,000 in lost travel costs, not to mention the undelivered wedding gifts to her cousin that traveled back to the U.S. with her in her luggage. The deportation also had another effect.

It strengthened her resolve to peacefully advocate for the return of Palestine and demand that her country alter its policies when it comes to Israel and its treatment of Palestinians -- especially U.S. citizens of Palestinian descent be they Muslim or Christian. (Last month 60 Minutes ran a piece suggesting that Palestinian Christians, once a strong minority, are leaving the Holy Lands due to Israel's harsh occupational policies.)

Yesterday Tamari met with Congressman John Shimkus (R-Collinsville) about her treatment by the U.S. Embassy in Israel.

"I plan to continue to raise the issue with the State Department that our government, which provides $3 billion each year in military aid to Israel, could do nothing on my behalf," she says. "If the U.S. is arming Israel, it seems we should have more say in how our citizens are being treated by Israel."