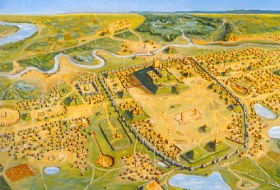 Even 900 years ago, big cities had suburbs. The biggest city in North America then was Cahokia, and its suburbs stretched westward across the Mississippi River and north across most of what is now East St. Louis. We know that the Cahokians had a nasty habit of using their suburban neighbors as human sacrifices -- way harsher than even the nastiest East Side joke -- but we don't know much about the lives of those suburbanites before the evil city folk clubbed them to death.

A group of archaeologists from the Illinois State Archaeological Survey (ISAS) has been trying to find out. Last summer, they unexpectedly discovered a previously-unknown mound in East St. Louis, at the edge of I-70, five miles from the main Cahokia site. At the base of the new mound were the remains of more than a thousand ancient houses. For the past year, the archaeologists have been patiently scraping away, trying to learn more about the people who lived in those houses.

Unfortunately, this dig site happens to be exactly where the new Mississippi River Bridge will land when it reaches the Illinois side.

By the end of the year, when the current dig is scheduled to finish, the archaeologists estimate they will have excavated only about 10 percent of what remains of the town. The remaining 90 percent, which lies under private land, could be lost to development once the bridge project is complete.

The Illinois Department of Transportation and Federal Highway Administration have been cooperating with the archaeologists for the duration of the dig -- and the bridge construction -- and plan to make it a permanent archaeological site, but Tim Pauketat, an anthropologist at the University of Illinois and leading authority on ancient Cahokia, is concerned about the 90 percent of the town that's not part of the dig.

"Because East St. Louis is right across from St. Louis, it's prime land for any kind of commercial development," Pauketa told St. Louis Public Radio. He added that the archaeologists have been trying to persuade the government to buy up that land, with little success.

When Cahokia was in its prime, in the twelfth and thirteenth centuries, it was home to 20,000 people and 120 pyramids and served as a major tourist and possibly even pilgrimage site: Pauketat says he has found Cahokia-made objects as far away as Oklahoma and Georgia. But the pyramid at the East St. Louis site doesn't appear on any earlier maps.

"For us it was a really big surprise to come out and discover that we have this big residential area for this ancient city," said Joe Galloy, who is coordinating ISAS's survey. Prior to this discovery, archaeologists had believed that all that was left of Cahokia -- and the Cahokians -- was at the mounds site.

"Was there a powerful leader here, or charismatic leader, that drew people in, attracted people? Did something happen here that drew them in? Or something about the location was more significant? Those kinds of things we just don't have answers for directly," Cahokia site manager Bill Iseminger said.

But maybe there's some clue hiding beneath East St. Louis?