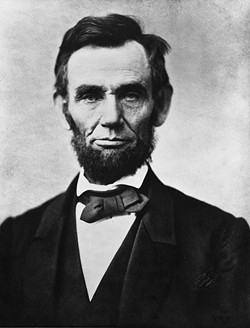 Dr. Charles A. Leale was the army surgeon who first tended to Abraham Lincoln the night he was assassinated by John Wilkes Booth. The 23-year-old doctor was in the Ford Theatre before Lincoln and company arrived, and he was present at the moment the president died. Mere hours after Lincoln's death, Dr. Leale wrote an account of everything that occurred that fateful night -- an account that was never released in his lifetime, and has been missing since its composition.

But researcher Helena Iles Papaioannou of the organization Papers of Abraham Lincoln (a group devoted to searching out documents written by or to Lincoln) recently found Leale's report in box of the Surgeon General's records at the National Archives. Thanks to the miracle of the internet, we can all read what Papers of Abraham Lincoln director Daniel W. Stowall calls "a first draft of history."

The report is not the original, but a "true copy" made by a clerk for posterity. You can read it in its entirety here, and view other recent Lincoln paper discoveries here.

The document is remarkable not just for its historical import but for its very "you are there" nature, outlining in clear and direct language what Dr. Leale saw and the treatments he vainly attempted. What leaps out from the beginning -- at least to me -- is that Abe Lincoln and entourage showed up the Ford Theatre at least 20 minutes into that evening's performance of Our American Cousin. Writes Dr. Leale:


I arrived at Ford's Theatre about 8 and 1/4 p.m. April 14/65 and procured a seat in the dress circle about 40 feet from the President's Box. The play was then progressing and in a few minutes I saw the President, Mrs. Lincoln, Major Rathbone and Miss Harris enter; while proceeding to the Box they were seen by the audience who cheered which was reciprocated by the President and Mrs. Lincoln by a smile and bow.

So he arrives well into the first act in a burst of noise and stolen applause, and an actor shoots him to death? I bet he checked his phone every three minutes and kept asking his wife what that guy said that made everyone laugh.

Maybe John Wilkes Booth wasn't so much a politically-motivated Southern loyalist as he was a stern advocate for quiet during the performance. Sure, you can quibble over his methods, but you can't argue with his results. After all, Lincoln never spoke in a theater again, did he?