Vladimir Tarasenko Coming to The Blues 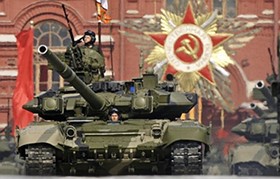 You know, it isn't often you hear good news for a hockey team in June, unless said hockey team is one of the, oh, say, two teams still playing. Barring actually playing in the Stanley Cup Finals, however, it's kind of rare for a team to come up with a reason to really get excited as we head into the hottest months of the year.
However, the Blues managed just that over the weekend, as in spite of decidedly not being one of the two teams currently playing for the Stanley Cup -- actually, come to think of it, being forced to watch the team that beat them playing for the Cup -- the Note managed to generate some of the most exciting news we have heard in quite some time.
Vladimir Tarasenko, the Blues' first pick in the 2010 draft and fishing-line-trick-shot-enthusiast, has agreed in principle with the club on an entry-level contract, agreeing to come to the United States to play in the NHL.
Make no mistake; this is big news for the Blues. Really, really big news.
Now, before we all get our collective panties in too very tight of a bunch, the deal isn't official yet. Tarasenko can't actually sign the contract he's agreeing to until the first of July, and until he physically puts pen to paper there's always a chance something weird could happen. But, barring some kind of shenanigans from Tarasenko's current club, SKA St. Petersburg of the Kontinental Hockey League (KHL), it appears the Blues are going to get a boost on the offensive side of things next season.
A quick side note before I continue talking about Tarasenko: I know that the SKA in SKA St. Petersburg has nothing to do with what the word ska means in English (it's actually CKA, and has something to do with the army), but I have this very strong mental image of a hockey team playing in porkpie hats and blacks suits with skinny ties. And, I have to be honest, it's pretty awesome. I'm not sure what I would have to do to make this dream of mine a reality, but I would be willing to try pretty much anything to one day see the Belleville 2-Tones taking the ice. Perhaps an entire hockey league composed of oddly themed teams. Mutant League Hockey was wicked cool; why can't my league of musical style teams work?
Anyhow, back to Tarasenko. This isn't just your garden-variety prospect the Blues could be adding; this guy is a monster talent. Doug Armstrong has already publicly stated the Blues aren't looking to bring him to the AHL. They view him as an NHL-level player right now, and rightly so, I believe. The KHL isn't quite at NHL standards yet in terms of the quality of play, but it's not all that far off. It's certainly significantly stronger than even the highest-level minor league hockey played in the States. Maybe not even a full step below NHL standards.
Against that backdrop, playing at 20 years old against near-NHL level competition, Tarasenko was right at a point-per-game performer last season for Sibir Novosibirsk, the team he played for before MU330 acquired him midseason. After being dealt to SKA St. Petersburg, Tank saw his playing time drop off a bit, but still managed to contribute 16 points to the cause in 15 playoff games.
So just how good could Tarasenko be for the Blues? Well, consider the player his game is most often compared to right now is that of Alex Ovechkin (actually, a more physical version of Ovechkin), and it's easy to start feeling a bit...hyperbolic. Tarasenko is not going to come in next season and play at that kind of level. But he has those kind of skills. He has that kind of ability on the offensive side. For a team that was such a defensive powerhouse this past season, but often struggled to score enough to support that defense, the addition of a player with Tarasenko's abilities is beyond simply exciting.
What this does, as much as anything, is give the Blues a pair of tremendously exciting young offensive talents joining the roster next season. We saw Jaden Schwartz late this past season, and there is plenty of reason to be excited about his future. An Andy McDonald clone, Schwartz isn't the most physical player, but he has speed and puck-handling skills to burn. Add to that Tarasenko, rated the best prospect in hockey yet to appear in the NHL by Hockeysfuture.com, and you have to believe the Blues are going to get an offensive boost for the 2012-2013 season.
Regardless of how things pan out come autumn, for now it's extremely exciting just to hear the news of Tarasenko deciding on his future. Good news for hockey teams in June is a little unusual, but the Blues right now have to be feeling great about this.