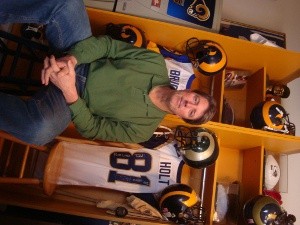 When last we left Todd Hewitt, the long-time equipment manager for the St. Louis Rams was reminiscing about his career with the team -- he's only the second man to hold the position, the first being his father -- and trying to reconcile his abrupt firing with an uncertain future.

Earlier this week Hewitt filed suit against the Rams claiming age discrimination was at the root of his pink slip.

It was head coach Steve Spagnulo who fired Hewitt in 2011, and according to Hewitt's suit Spagnulo/the Rams fired several workers older than 50, among them the head of security, the team photographer and the vice president of operations. All were replaced by much younger people, according to the suit.

Spagnulo's long gone, only lasting another season after he fired Hewitt. For the life-long Rams employee -- Hewitt started at age 11, helping his father -- that had to be bittersweet. Hewitt told the RFT's John Tucker back in January 2011 that he was "praying they lose every game next year."

The team went 2-14 under Spagnulo that next year, and Spagnulo was summarily fired on January 2, 2012 -- just barely more than a year to the day of Hewitt's own firing.