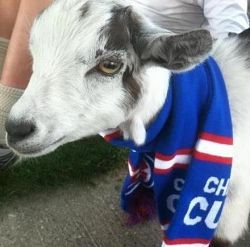 Yes, the rally squirrel was endearing. Yes, it was a tiny, furry beacon of hope that sustained us through three-quarters of playoff season. Yes, it raised money for charity. But does it have the power to break a twelve-game losing streak?

Never mind that the Cardinals seldom find themselves in that sort of predicament. Perhaps they don't get a more powerful spirit animal because they don't need it the way their hapless division rivals the Chicago Cubs do.

Until yesterday, the Cubs had gone two weeks without winning a game. But then Wrigley the Goat appeared at Wrigley the Field after traveling 2,000 miles from Mesa, Arizona, on hoof (and also by baby stroller, pushed by his human handlers). And the streak was shattered.

The legend of Wrigley the Goat began last summer when a quintet of Cubs fans working at Denali National Park in Alaska thought it would be a neat idea to walk from Mesa, Arizona, site of the Cubs' spring training camp, to Wrigley Field. They would use the walk to raise money for the Fred Hutchinson Cancer Research Center in Seattle in honor of the mother of Matt Gregory, one of the walkers, who had recently passed away from cancer.

Last winter in Mesa, just before embarking on their epic journey, the five friends came upon Wrigley, a young Nigerian Dwarf billy goat. As devout Cubs fans, they surely knew that the relationship between their team and goats was particularly fraught, but although Wrigley was but a few months old at the time, they sensed his mystical curse-breaking power and adopted him as their mascot.

The hike began February 25, just as pitchers and catchers were reporting to spring training. Though they missed seeing the Cubs then, the group did manage to catch them a couple of times on the road, most recently at Busch Stadium on May 14. Even though Wrigley didn't get to see the game in person, the Cubs still won. The goat has some powerful mojo. He also raised $20,000 for cancer research.

In an interview with CBS News in Chicago, Gregory reveals that Wrigley ate grass by the side of the road. On one hand, curse-breaking is a delicate mechanism that ought not to be messed with. On the other, surely the goat deserves some sort of reward for working such a miracle?

And you Cardinals fans who scoff: Who among you would be willing to walk from Jupiter to show your devotion? It's only half as far as the distance from Mesa to Chicago, if that's what's stopping you.