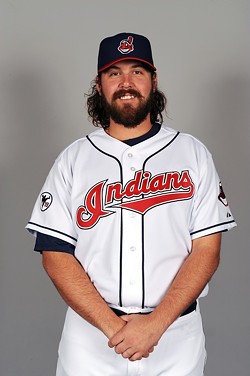 You might remember Chris Perez from his time here in St. Louis as a young fireballing reliever with shaky-at-best control. Or, you might remember him as the guy who was traded away for Mark DeRosa. (An ill-fated deal if ever there has been one; DeRosa got hurt and contributed virtually nothing for the Cards down the stretch in 2009, other than a love of all-male hottubbing.) Or, hell, you might remember him for his unkempt hair and wide, child-bearing hips. (No offense, Chris.)
But you may need to update your Chris Perez knowledge; he has now taken it upon himself to play the role of heel to the city of Cleveland. And he's doing one hell of a job of it. He probably isn't going to dethrone LeBron James as public enemy number one anytime soon, but he's making a pretty good go of it all the same.
The Indians' closer went off on the team's fanbase this past weekend -- not once, but twice. On Saturday he called out the fans for not coming to see their first-place team play. On Sunday, rather than backing down and offering up the usual half-assed athlete apology, Perez went right back down the same road, and then went a little further. He even brought up St. Louis and Carlos Beltran.
It was, I have to admit, kind of awesome.
The thing about all of this is pretty much everything Perez said is almost exactly accurate. The Indians do have an interesting young team currently sitting atop the American League Central. Now, I don't expect they will stay there all season; the Detroit Tigers are still a much more talented team. But, for now, Cleveland rules the roost in their division. Nor is this a case of an athlete taking out his frustration with his own performance on the people in the stands, a la Kerry Wood; Perez is currently having an excellent season, with a 2.23 FIP, 13 saves in 14 opportunities, and a 2.5/1 strikeout to walk ratio.
No, Chris Perez is speaking the truth when he blasts the fans in Cleveland, and it hurts me to say that. The Indians are young and exciting and really pretty good, and they are also dead last in baseball in attendance. Dead. Last.
Cleveland is currently drawing an average of 15,872 fans per home contest. That's over 3,000 head fewer per game than Oakland. Oakland. You know, the team desperate to move to a new city and some other stadium where they can draw fans? Yeah, that Oakland. The Pittsburgh Pirates are averaging almost 23,000 per game, and my mother still marvels every time the Cards play there at how empty their stadium is. And they're beating the Indians by 7,000 a night.
At least the Athletics have the excuse of an awful stadium. I've been to Progressive Field in Cleveland -- back when it was still known as The Jake -- and it is, quite frankly, one of the best ballparks I've ever had the pleasure of visiting. PNC in Pittsburgh is probably tops, and I love Coors Field, but Jacobs-slash-Progressive is right up there. So, good team, beautiful stadium, still can't draw fans.
I just don't get it. And apparently neither do the Cleveland players. Or, at least one of them.
I'm not sure what to make of Perez calling out the fans, either; it isn't often an athlete insults the people in the stands and sees it end well. But, hey, maybe the Indians will decide to trade him now. I can think of at least one midwestern team with tremendous attendance that could use some bullpen help right about now...
One other real positive note to this story: Kenny Lofton is apparently pissed off now at Perez. And anyone who can piss off Kenny Lofton is okay by me.
Oh, and finally, I would just like to point out that Chris Perez uses the Prodigy's "Firestarter" as his entrance music. That alone is enough to make me love him. Not least of all because starting fires kind of seems to be the opposite of what a closer is supposed to be doing, you know?
Then again, considering how the past few days have gone for Perez, maybe starting fires is what he's best at after all.