Batman's Tumbler and Batpod Park at Busch Stadium This Wednesday

The Tumbler and the Bat-Pod -- which were known as the Batmobile and the Batcycle when I was a kid, goddammit -- are touring the country right now to goose the hoopla for The Dark Knight Rises, the final installment of Christopher Nolan's bat-trilogy. If you're one of the multitude who are eagerly awaiting that film's release (July 20, as if you didn't know), you can feed your bat-mania this Wednesday afternoon at Busch Stadium.

Both futuristic vehicles will be parked out front of Busch from 3 to 7 p.m. Wednesday, May 23 (immediately preceding the Cardinals game against the San Diego Padres), and the public is more than welcome to take photos. As this is a promotional tour, you're encouraged to Tweet your photos with the hashtag "#TumblerTour," which looks like a missed opportunity. Why wouldn't they promote the Tumbler Tour on Tumblr? 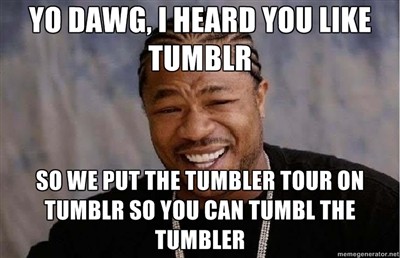 You're gonna have to work smarter than that if you want to top Whedon's Avengers' gross this summer, Nolan.