Teryun Jackson Skips Step Two, Flushes Ear Down Toilet After Biting It Off 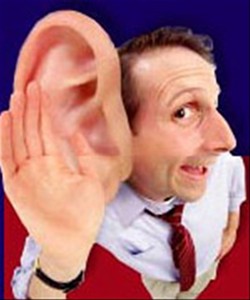 Teryun Jackson, 22, and Marlon K. Jackson, 23, are already in the St. Clair County Jail for unlawful use of a weapon and first-degree murder, respectively. They're both facing additional charges of aggravated battery and mob action for attacking another inmate on May 11.
You might want to put on ear muffs before hitting the jump; not for any profanity, just for your own sense of security.
Teryun and Marlon attacked the third man because of an argument over gambling debts, according to the Belleville News Democrat. In the scrum, Teryun Jackson bit off the man's ear, then ran to the toilet and flushed it away.
He was either trying to hide the evidence -- which is just plain stupid, because the bloody stump of an ear proves an assault occurred as much as the actual chawed-off ear does -- or he was trying to give the victim the first-ever swirly on an installment plan. Also stupid, by the way.
Master Sgt. Thomas Trice of the St. Clair County Sheriff's Department praised his officers' quick response to the incident, and the fact that they were able to isolate the aggressors before further damage was done. Indeed, when you're on duty in the St. Clair lock-up, you have to keep your ears pricked up for trouble at all times.