All the major news outlets (KMOV, KSDK, KTVI, KMOX and the Post-Dispatch) are covering this grisly situation:  On Tuesday, cops and members of Stray Rescue walked into an abandoned apartment building in Hamilton Heights to find five dead dogs.

At least two were strangled, apparently with electrical cords; one of these had furniture stacked on top of it. Another canine was burned (see photo above). And another dog's neck was crushed by window-slamming on the second floor, according to Stray Rescue, and left to hang lifelessly on the window sill.

Click here to see photos of the crime scene.

"Stray Rescue responds to some of the worst animal abuse cases in the entire nation," they say on their website. "But today.... was one of the most horrendous cases of animal abuse we have ever encountered....[and] an unforgettably gruesome scene."

They're now offering $5,000 $10,000 to "anyone who comes forward with any information that leads to the conviction of these abusers."

To honor the dead dogs, Stray Rescue has given them names: Brandy, Schnapps, Frangelico, Grand Marnier and B&B.

One narrative that's emerged is that the perps are gang members. There was lots of gang graffiti in the building, leading KSDK to call the building a "ganghouse."

It's reinforced by Stray Rescue, which wrote that that:


One witness in the area, who wishes to remain anonymous because they are afraid of the gang who committed the abuse, reported a sixth dog who was lynched, having been hung out of a window. This dog has not been recovered.

A neighbor told the PD that the building had recently been a marketplace for drugs and sex, and dogs were kept as protection from the cops. But everybody cleared out, rotten smells began to waft out of the place, and police were called.

The PD had a poignant and sad quote as the kicker on its story:


The neighbor said a nice woman used to own the building and kept it in great shape, but the building had fallen into disrepair over the years. Other neighbors said the block was home to a wide range of criminal activity -- "hang around long enough, you'll see the show," one man said. 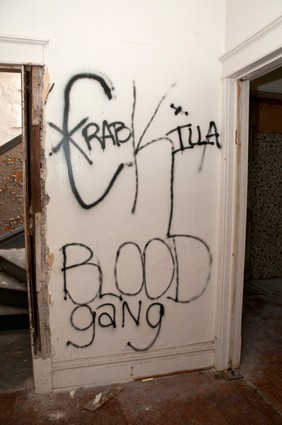