Peter Marina Tells of His Adventures In Pentecostalism and Tongue-Speaking 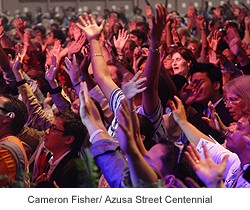 Like everything else, there are rules to tongue-speaking. Peter Marina, now a visiting assistant professor of sociology at the University of Missouri-St. Louis spent four years embedded in a small Pentecostal church in Brownsville, an impoverished neighborhood in Brooklyn, New York, doing ethnographic research and learning its culture and folkways, and can list them by heart.

He'll be publishing his story as a book called Getting the Holy Ghost: Experiences in An American Tongue-Speaking Church, but yesterday he gave a preview in the form of a lecture and discussion at the Forest Park Visitors Center sponsored by OASIS and the Academy of Science of St. Louis.

First, you have to be saved and have the indwelling of the Holy Spirit. "It's a sign of the Holy Ghost feeling," Marina said. "It's spontaneous, and only when the spirit allows. You can ask the spirit to give utterance, but the speaker maintains control of his or her faculties."

In Marina's church, which he calls the Holy Ghost, the time and space for speaking in tongues was distinct from other parts of the service. During announcements, the congregants sat in their pews. But during prayer, they took to the aisles, spontaneously singing and dancing and, yes, speaking, sometimes to the point of falling-down exhaustion.

The beauty of Pentecostalism, at least as its practiced in small churches like the Holy Ghost, Marina said, is that it's completely unorganized. It's not about being part of a larger system, like the Catholic church.

"It's not a religion," Marina explained. "It's about your relationship with God. It's personal. There's no intervening authority. Each relationship is unique. And if you can attract a flock, you can be a preacher."

For that reason, Pentecostalism has traditionally appealed to the poor and marginalized. And Brownsville is one of the poorest and most marginalized communities in the United States. It contains eighteen housing projects and 300 churches.

"[Small Pentecostal churches are] connected with the failure of other institutions to respond to poverty," Marina said. Marina believes that the larger a church grows, as soon as it becomes fully established as a religious institution, it starts to die.

"A small church can balance the charismatic and the institutional," he said. "It becomes postmodern. The enchantment can continue to exist in the modern world and blend with rationality, as long as it's not too institutionalized."

OK, but what does this have to do with cool supernatural stuff like speaking in tongues?

According to Acts II, precisely 50 days after Jesus rose to Heaven on Easter Sunday, his apostles spontaneously began speaking in tongues. Paul in particular discussed the practice quite a bit in his Letter to the Corinthians, but latter-day Christians didn't take it up again until about 100 years ago when a pastor named W.J. Seymour at the Azusa Street Revival, a church in the Los Angeles barrio, began speaking in tongues and started the Pentecostal tradition.

The Pentecostals hold that once you've been saved and baptized, you receive a supernatural gift: healing, prophecy, speaking in tongues, interpreting tongue-speakers. Of these, speaking in tongues is considered the greatest. It's a sure sign that you have the Holy Spirit and that your salvation is assured.

Some preachers teach tongue-speaking to the members of their congregations. But in some churches, like the one Marina studied, speaking in tongues is a special gift, possessed by only a few.

"When you speak in tongues," Marina explained, "you become truly connected to the Holy Spirit. It's a bridge-burning act. You've embraced salvation."

But even the saved are still human and display some of the less-holy human traits. If not everybody can speak in tongues, then the people who do attain higher status within the church. And if your tongue-speaking dialect evolves -- Marina heard one man speak in a manner that sounded vaguely Asian -- it means that you've gotten even closer to God. And so, naturally, the people who don't like the tongue-speakers personally will whisper that they're faking.

As for Marina, though he lectures passionately on the subject (his enthusiasm appeared to have spread even to his hair, which sprung out from his head in wild coils as he spoke), he never spoke in tongues during his entire four years of ethnographic study. He became close to some of the congregants, joined in the rituals of their lives and learned their life stories. But he remained, in his words, religiously unmusical.

"They tried to save me, numerous times," he confessed.

Replied a man sitting in the audience, "God bless 'em!"