The Missouri River Is Among the Most Endangered Rivers in America 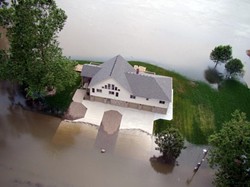 The Missouri River ranks number four on American Rivers Most Endangered Rivers list, and it's not because of pollution (that would be the Mississippi's issue): The Missouri is threatened by outdated flood management.

According to American Rivers, 75 years of flood control that relies mainly on channelization and dredging has stripped the river of its former identity as a broad, sediment-laden river (it wasn't known as The Big Muddy for nothin') and transformed it into a series of reservoirs on the upper stretch and deep channels on the lower stretch. The result is enhanced flood risk and a continuing threat to wetlands and the supported wildlife.

American Rivers recommends a "smarter, more natural, adaptive" flood response plan for the Missouri that uses "sound science and public involvement" to chart a new course, rather than a reliance on dams and levees. The benefits of doing so include increased safety, better water quality, more natural habitat for wildlife and better recreational use of the river -- all of which would equal a more healthy Missouri River.