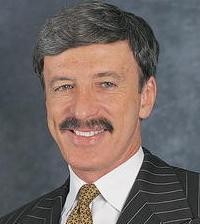 Today Attorney General Chris Koster is expected to release details of the St. Louis Rams' counter-proposal on how to fix up the Edward Jones Dome -- despite objections from the football team and the Convention and Visitors Commission.

We're not saying who, but someone very close to the negotiations presented Daily RFT this morning with a rendering of the Rams' counter-proposal, outlining the team's requirement that the Edward Jones Dome be equipped with a retractable roof. And, wow! The proposal would make the Dome as unique as its owner, Stanley Kroenke.

We're told the roof is made of a proprietary fiber developed by Monsanto from a patent owned by Hans Wiemann that mimics the structure of human hair, thus providing coverage and insulation. Each "follicle" is individually anchored in a lightweight yet strong aluminum "skin" that will cover the center of the stadium. This skin can be easily rolled back and stored on opposite ends of the Jones Dome, enhancing the overall aesthetic of the building as a kind of "dressy eyebrows" (fig. 2, below).

The Rams' proposal notes that, "This cover is cost-efficient, environmentally friendly and payable in easy installments. It also anticipates future refurbishments, as it can be easily switched out to change with styles and times."