We'll Get By (With a Little Elk From Our Friends) 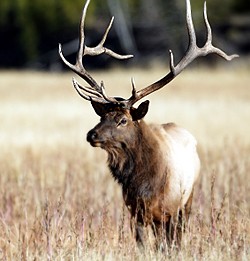 Got elk? Missouri does. And we're about to double the population by trucking in 35 more from eastern Kentucky.

Last year -- despite dire warnings from the Farm Bureau -- the Department of Conservation reintroduced 34 elk to a confined ranch in the southeastern part of the state. (And we say "reintroduced," because these creatures roamed Missouri's hills long before the arrival of the White Man, but were wiped out by the end of the Civil War).

Opponents had grumbled in a letter to the governor that


"Elk obstruct roads, trample fences, and decimate crops and forage.  Disease transmission between elk and livestock is a major concern.  Landowners suffer the brunt of the unintended consequences of elk restoration.  If imposing these risks associated with elk is deemed acceptable today, then will 'native' wildlife species that pose greater risks be next?"

But none of that has happened - at least so far.

Up until now, the elk have become accustomed to Missouri while staying inside the 12,000-acre refuge at Peck Ranch Conservation Area, which straddles Carter, Reynolds and Shannon counties.

But the ultimate goal is to have them propagate in the wild. The state has estimated that four years from now, the population will be robust enough for hunting.

Last December, the program came under fire from State Auditor Tom Schweich, who concluded that:


As of June 30, 2011 the MDC had spent more than $1.23 million to reintroduce just 39 elk, spending three times more to reintroduce about one-fourth as many elk as planned. Moreover, the MDC executive staff and the commission discussed the elk restoration project in closed sessions in January, April and May 2010 in apparent violation of the Sunshine Law.


The MDC writes on its website that the elk restoration project was "prompted by citizen requests." (You may not be a hunter, but you may want to drive the kids down to gawk at the elk, which are known as tourist-attracting "charismatic megafauna").

The public and the media will have no access to the refuge until mid-summer, to reduce stress on the animals.