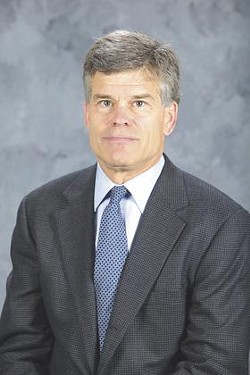 At long last, the Blues ownership matter is settled. The NHL board of governors unanimously approved the sale of the team yesterday for an estimated $130 million to the ownership group headed by local businessman Tom Stillman. Other local luminaries in the group include former Senator John Danforth, Donn Lux and Steve Maritz; there are additional minority partners who have yet to be officially named, but who are hopefully also residents of St. Louis. Today's official announcement of the sale will bring closure to a process that started two years ago.
As a fan of the team for more than 30 years, I have two requests of the new ownership.
First: Give me some fucking continuity. You guys are the eighth set of Blues owners, and the seventh owners during my relationship with the team. The longest tenured of that group of seven was the Kiel Center Partnership at a whopping eight years. I'd like to see that record shattered. At this point in my fandom, a fully committed ownership is as much of a pipe dream as a Stanley Cup.
So don't open today's press conference with a speech about how much you love hockey and the team and the city, and how you're committed to winning and going all the way if you've got a five years or bust plan that ends with the team back on the block in 2016. I've seen that one already, and it always ends with a rebuilding plan and another new owner making a speech about the team's glorious future. The truth is, up till now it's only ever the fans who are around for that future. We're always gonna be there -- that's the nature of hockey's hardcore fans. So if you're planning on taking advantage of our hope for a few years and then cashing out, here's a preemptive "fuck you, assholes" for doing it again.
Second, there are persistent rumors that Brett Hull is going to have some sort of management job with the team. Hullie is a Blues legend and a fantastic character, but please don't give him personnel power like he had in Dallas. That Sean Avery ordeal was a nightmare. Give him his old "Ambassador of Fun" title, put him in the commercials and then let him play golf all day.
That's it. Two demands. You'll notice that "win the Stanley Cup" isn't on there, because there's never been an owner who played the game while owning the team since Eddie Shore. The players will take care of the Cup in good time. You guys just stick around for the next couple decades and I'll be happy.