KSDK Knows When You're Going to Die, Based on ZIP Code

To hype last night's "I-Team Investigation," KSDK-TV (Channel 5) had been running a promo piece that featured two cartoon guys. Cartoon Guy No. 1 is Joe, who, the voiceover says, lives in St. Charles. He's got glasses and kind of looks like George Costanza. Cartoon Guy No. 2, Doug, favors a young Patrick Swayze and has a camera slung over one shoulder (because he's an artiste?). He lives downtown. They wave.

"Statistics say that Joe will outlive Doug by as much as a decade." A cartoon heart, presumably Joe's, pumps merrily along, and a line graph's arrow surges upward. Tough break, Doug. "In fact, where you live could determine how old you'll live to be. How long local people live, ZIP code by ZIP code, tonight at 10."

Sweet Jesus! We knew that our loose morals, hard living and woeful neglect of leafy greens weren't doing our odds at a long life any favors, but we hadn't suspected our south-city address was conspiring to kill us.

As it turns out, not everyone living in the city is destined for an early grave -- not even necessarily those who live "downtown" like Doug. No, the cursed ZIP code is 63106, the north-city neighborhood surrounding Fairground Park, where the average life expectancy is just 69 years old. During the segment, the city's health director, Pam Walker, chalked up the shorter life span to the expected culprits: poor nutrition, people not seeing their doctors regularly, high rates of smoking and inadequate exercise.

(Interestingly, no mention was made on-air about where the numbers came from, just that KSDK had obtained an "early look at data that won't be released till the end of the year." Its website cites the Missouri Department of Health for the county statistics and the St. Louis Department of Health for the city's, and says "[Walker] shared the preliminary life expectancy data with us because she said the numbers need to be reported sooner rather than later." Soooo...that's settled.) 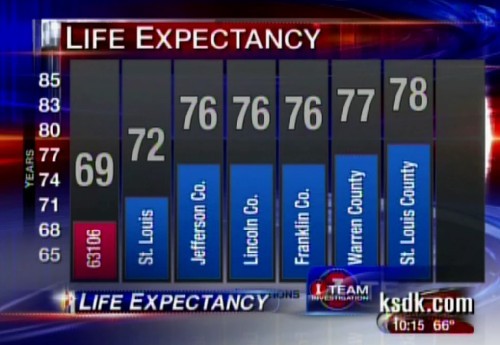 But it's not all gloom and doom for city dwellers: If you call the '108 (Central West End) home, you can expect to live about 77 years -- the same number of years as Warren County residents -- without, you know, having to live in Warren County. That's more than the average life expectancy of people living in St. Louis City (72), as well as people living in Jefferson, Lincoln and Franklin counties (76). St. Louis County averages 78 years, and St. Charles County, home of cartoon George Costanza, comes in at 79 years.

But guess who's gonna sail right into their eighties, outliving everyone in the metro region, including in Madison and St. Clair counties in Illinois? The people who live in south city's 63109 ZIP code, that's who. Residents of neighborhoods including St. Louis Hills, Lindenwood Park and South Hampton can expect to reach a ripe 82 years old, more than three years above the national average, according to the Centers for Disease Control. (Living there really is good, guys! And gals!)

But KSDK -- St. Louis' News Leader -- only got half the story. We at Daily RFT took it a step further and were able to uncover the leading causes of death within individual ZIP codes. We just thought you'd like to know this information "sooner rather than later." For some reason.