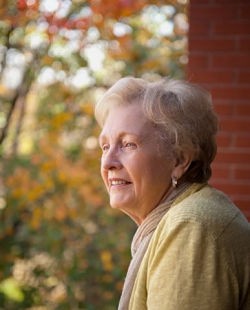 It's a pity Jean Carnahan decided not to call her new collection of humorous stories about getting older 50 Shades of Gray. Not only could that title have given her fodder for a meditation on changing hair color, she might have been able to sell a bunch of extra copies to people who confused it with E.L. James's erotic best-seller. (That's what happened to a young adult book called Between Shades of Gray. It's about how Stalin murdered loads of people in the Baltic countries. There's not much scope there for sexual fulfillment. We're betting there are some mighty disappointed readers out there.)

But instead the former first lady of Missouri and U.S. Senator chose the title A Little Help From My Friends...And Other Hilarious Tales of Graying Graciously. In the long run, probably a wiser choice, since the Beatles reference still makes sense 45 years after the song first came out. Also, Carnahan managed to capture the number one spot on the St. Louis bestseller list this week, while 50 Shades of Gray languishes at number two.