Lillian Musial, known as Lil, who was married to some sort of baseball player guy for nearly 72 years, died yesterday evening at home in Ladue. She was 91. Her grandson Brian Schwarze said she had been ill recently, and her death was not unexpected.

Lil Labash grew up in McKean, Pennsylvania, where her parents owned a grocery store. Like many, she first became smitten with Stan Musial when she saw him, on the baseball diamond. That was in 1934, when he was playing for their local team, the semi-pro Donora Zincs. They were both fifteen. Unlike most fans, she was less impressed with his hitting and fielding prowess than with how cute he looked in a baseball uniform. (Hey, it was still pretty early in his career.)

They started dating soon after and married in 1940. Stan later said their meeting and coming together was "inevitable." Well, obviously, at least based on this photo their grandson posted to Twitter earlier today: 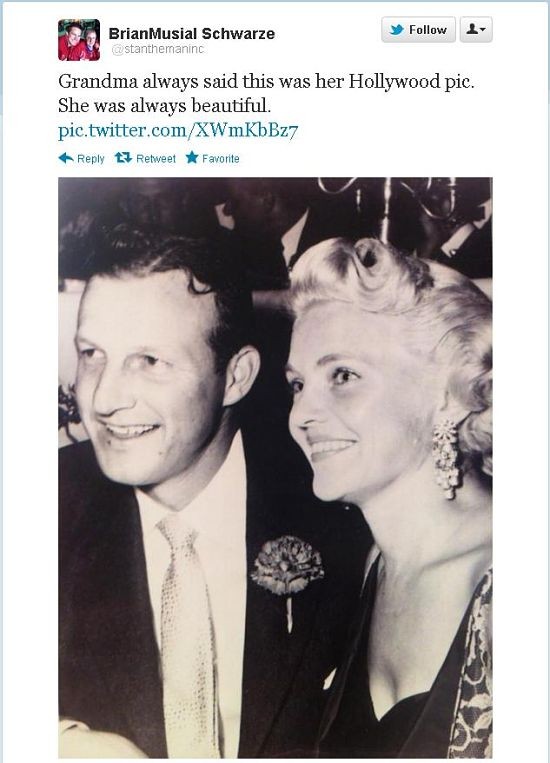 Throughout her husband's career, Lil stayed in the background, busy raising their four children. "Life is family," she once told the Post-Dispatch. "That's what it's all about." According to her niece, Laurel Grimes, Stan considered her "his rock."

But she was also deeply involved in charity work, particularly with Covenant House, which helps out homeless and runaway teenagers. As recently as last fall, she was still appearing at fundraising events.

She passed away at 6 p.m. Brian Schwarze told the P-D she would would have liked that: Six was her favorite number and, incidentally, the one Stan Musial wore on the back of his uniform.

In addition to her husband, she's survived by their four children, eleven grandchildren and twelve great-grandchildren.