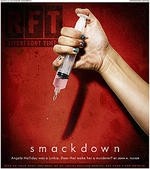 Last August we published a feature article titled Smackdown, chronicling the downfall of Angela Halliday, a former dean's list student who became addicted to heroin. After the overdose deaths of an acquaintance and, a month later, her boyfriend, Madison County, Illinois, prosecutors charged her with two counts of drug-induced homicide, alleging she delivered the fatal heroin to each of them, thus contributing to their deaths. (Whether or not Halliday actually "delivered" the heroin to them is a matter of debate.)

Halliday pleaded not-guilty to both charges, each of which carries a six-to-30-year prison sentence. Now, exactly one year after her arrest, without any kind of plea deal in the court record, a potentially high-profile trial looks more likely. (Movement on the second murder case will likely stall until the first case is resolved.)

"The news articles offer no probative value; or, in the alternative, any probative value is far outweighed by their tendency to prejudice and/or inflame the jury," Griffin wrote in his motion in limine, referring collectively to our main article and three supplementary Daily RFT blog posts about the Halliday cases, published around the same time.

In the same motion Griffin asked Judge Hackett to prohibit the State from submitting as evidence a blog that Halliday maintained prior to her arrest, which included several references to drug use. (See Griffin's two-page motion in limine, filed in April, below.)

During the hearing Griffin also argued a motion for leave to file affirmative defense, which he filed last October, suggesting that just because Halliday was linked to the drug-related deaths doesn't mean she caused them. (In the motion, which is also embeded below, Griffin states that Halliday participated in the same drug deal as the man who died.)