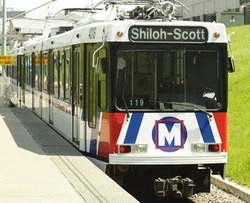 The federal government has declined to pursue a whistleblower lawsuit against MetroLink on behalf of an employee of the transit agency.

As KMOX reports this morning, Eric Fields, an engineer for Metro, filed a lawsuit last October claiming that the light-rail line had serious construction defects making it unsafe. The suit was unsealed last week when the federal government declined to get involved in the matter.

Metro also denies the charges. Fields, meanwhile, remains a Metro employee, according to the radio station.