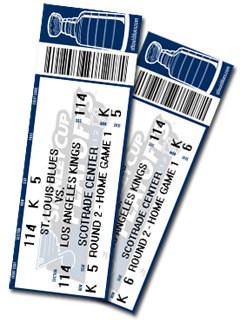 The first two games of the Blues vs. Los Angeles Kings second-round playoff games don't have set dates yet, but they're guaranteed to be at the Scottrade Center. They'll set you back a tidy $65 to $442 a pop, plus service fees of course, and they're going fast. You could, however, win a pair if you're willing to play the St. Louis Blues Playoff Ticket Hunt game, a sort of high-tech scavenger hunt set up by the team.

That's a lot of social media interaction, which means a 12-year-old is probably going to win it. Darn kids -- get off my lawn! And give me those tickets.