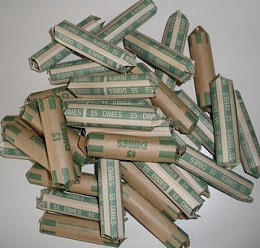 Shut up and listen because you're about to learn history -- usable history.

As reported Monday by KTVI Fox2Now, a band of ne'er-do-wells paid visits to Kakao Chocolate in Maplewood and other area businesses a couple of weeks ago.

They posed as delivery people and claimed they needed to give yonder customer some change, but all they had were rolls of dimes and didn't want to give those to the customer.

So the sweet/trusting St. Louis merchants obliged, accepting the dime rolls and handing over five-dollar bills. But they soon found out these were ACTUALLY PENNY ROLLS with dimes on either end.

Thus, for each roll, these sweet/trusting merchants got taken to the cleaners for $4.32. Yeah.

The "Pig in the Poke" has roots in the Middle Ages. (Which we know because we saw it on the Internet, which is scam-free.) According to "Australia's Honest Con Man Encyclopedia of Scams":

The original Pig In The Poke was used in medieval marketplaces. Villagers would buy a piglet at the market which had it's mouth and feet bound before being dropped into a sack. The con artist would swap the pig bag for one with a bound and gagged cat. When the victim got home and opened the bag, they found they had bought a worthless cat. Hence the saying, 'to let the cat out of the bag'

So this recent dime-roll scam was but a newish twist on an old swindle.

At this point, Daily RFT believes the moral of the story should be clear: The people working at Kakao Chocolate will believe anything you tell them.

(Kidding. The moral is that all deliverymen are con-artists).