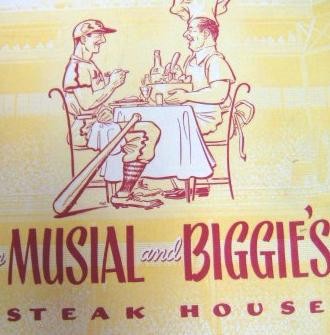 Sports Illustrated this week features a fantastic recollection of the early days of the NBA as excerpted from Frank Deford's new book, Over Time: My Life as a Sportswriter.

The entire article is worth the read, but it's the very beginning of the story that's most interesting for St. Louis readers. Deford writes how the early days of the NBA were free of pageantry. Evidence of that was a trade he witnessed following the 1965 All-Star Game in St. Louis.

The journalist writes that he was attending a reception at one of the old Stan Musial and Biggie's restaurants when a referee he knew pointed to the bottom of the stairs and said, "You know, they're trading Wilt down there."

"So we all peered down the stairs and, sure enough, there were the San Francisco Warriors' owners and the Philadelphia 76ers' owners working out the deal," writes Deford. "They traded Wilt in a restaurant."

It's unclear from Deford's article which Stan Musial and Biggie's was the site of the Chamberlain trade. I'm told the main restaurant was on Oakland near where the Science Center sits today. Another one was at 6435 Chippewa (according to memorabilia I've seen on Ebay). That site is now a doctor's building just west of Hampton Avenue.