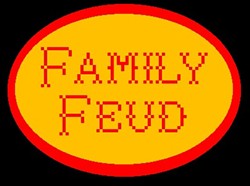 Tommy Bryant, Jr, 28, was allegedly killed by his cousins in what Bryant's girlfriend calls a "family feud" that started at nearby Stockton Lake. Bryant spent Sunday at the lake with his family, and he and his cousins got into it for reasons unknown. He then returned home to his trailer off Route W and Highway 123 near Eudora, Missouri, at which point he was allegedly hit and knocked airborne by a pick-up truck driven by those same cousins

Wait, it gets more rural.

Bryant then picked himself up and headed inside. An hour later, Bryant was again outside when the truck returned and hit him again, this time fatally.

Police are searching for the accused cousins, but have not released names or descriptions.