It's World Book Night, So We Visit a ReadMob and Get Advice from Tim O'Brien

Sometime today, if you're lucky, somebody will shove a paperback book in your face and demand you take it home and read it. There are worse fates that could befall a person.

St. Louis has one of the highest number of donors per-capita in the entire country. At Subterranean Books last Tuesday night, some of the donors gathered to pick up their books and share where they'll be giving them away: The Poisonwood Bible to high school students, Patti Smith's memoir Just Kids to concertgoers outside the Pageant, The Brief Wondrous Life of Oscar Wao to young gamers outside the comic book store.

The gathering included staffers of the RFT who will, later this evening, be handing out copies of The Things They Carried, Tim O'Brien's great, great collection of short stories about the Vietnam War.

But before that, we stopped by the Arch to check out the ReadMob, organized by the St. Louis Independent Bookstore Alliance. 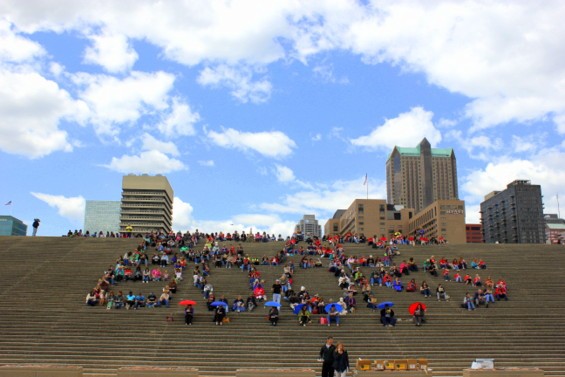 About 150 people, including a couple of busloads of students from Christ Community Lutheran School, gathered on the Arch steps at 12:30. The booksellers had marked off, with chalk, where everyone should plop their butts down to read so their bodies would spell out "Read Books." So many people showed up, the crowd had to form the letters twice, so everyone would get a chance.

"It was so much better than I expected," said Jarek Steele, an owner of Left Bank Books, who, along with Nikki Furrer of Pudd'nhead Books, was directing the readers into position. "It was beautiful!"

"It got really quiet," said Kris Kleindienst, Steele's co-owner. "Everybody was reading." Kleindienst had brought Heaven Lake by John Dalton. "I'd like to stay and read for a while," she said wistfully.

In front of the steps were a couple of boxes of World Book Night books for ReadMob participants to take with them and pass along. Tonya Lee Johnson had grabbed copies of The Lovely Bones and A Prayer for Owen Meaney to give to prison inmates. "They need to read, too," she explained.

We didn't have any such definite ideas about who we should give our 20 copies of The Things They Carried to. So we called up O'Brien at Texas State University in San Marcos, Texas, where he's a professor of creative writing, to ask him what he thought we should do. He liked our idea of giving the book to people who were already carrying things, but he had a couple of other thoughts: 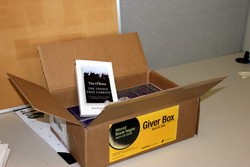 "There are so many similarities between Vietnam and the current wars," he continued. "We don't know who the enemy is. There's no front or rear. I'd go to the VFW and American Legion and say, 'Here's your book.'

"For me, the book is for general readers. It wasn't written to be taught in schools. It's for you and me. I didn't write it for a special audience. Everything I had to say is already in the book.

"I like the idea [of World Book Night]. I saw a video from England when they did it last year. They had people standing in front of a movie theater, and people were taking the books. It was a rotten movie anyway. It's hard to say no to a good book."