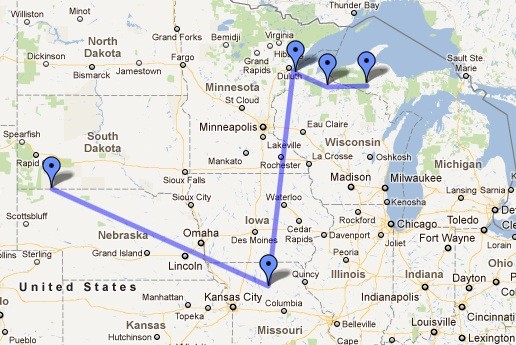 First things first. The word Missouri in the headline above probably should be in quotes. Why? Because the cougar photographed in north-central Missouri's Linn County in December 2010 is probably not originally from the Show-Me State.

How do we know this? Because conservationists tracking antelope along the South Dakota and Nebraska border caught a very similar cougar in April 2010 and tagged its ear and put a radio collar around its neck.

Jeff Beringer, a furbearer biologist with the Missouri Department of Conservation, tells Daily RFT that the combo of the collar and the tag makes the cat unusual. "Most cougars -- when caught -- are collared with a GPS device that can track their range far past the limited scope of a radio collar," notes Beringer. "And this radio collar, in particular, has a big external antenna that's easy to identify."

So assuming that the cat collared and tagged in South Dakota in April 2010 is the same photographed by a trail camera in Linn County in December 2010 (as Beringer and his colleagues at the Conservation Department believe is likely) the cat would have traveled at least 500 miles to arrive here.

That's not all that strange. Biologists believe that all of the 28 confirmed mountain lions sightings in Missouri since 1994 are cougars -- most, if not all, males -- that have wandered here from the Dakotas looking for a mate.

But what is somewhat mind-boggling is that the Linn County cat may have just been starting its road trip.

Seven months later -- in July of last year -- trail cameras in northern Wisconsin photographed a cat with the same descriptions (a radio collar and an ear tag). Wildlife workers in the Upper Peninsula confirmed sightings of an identical cougar in September. Beringer, with the Missouri Department of Conservation, thinks it's probable -- though not guaranteed -- that the Wisconsin and Michigan cougar is the same one that was photographed in Missouri.

The animal's whereabouts are currently unknown.

As the crow flies, the cougar would have traveled over 1,100 miles from South Dakota to Missouri and up to Wisconsin and Michigan. And that's assuming it went in a straight line, which is highly unlikely.

"We know that these dispersal males can travel quite a range in search of a mate, but until you actually map it, it's hard to believe how far they'll travel," says Beringer.

Still, "Missouri's" meandering cougar isn't the most well-traveled kitty Beringer has ever heard of. Last summer a 140-pound mountain lion was struck by a car and killed in Connecticut. Biologists believe the animal roamed 2,000 miles from the Black Hills of South Dakota.

Beringer is the author of the article Living with Large Carnivores in this month's edition of the Missouri Conservationist.