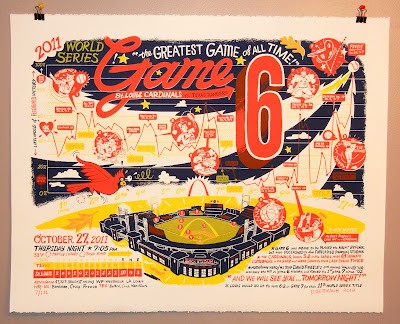 You know, I saw this about a week and a half ago, and I made a mental note to write about it. The next couple of days I had other stuff that really needed to be covered, so I just put it to the side, pinned that mental note on it, and said I would do it soon. Sadly, my mental notes seem to be increasingly unreliable -- I think I might have really, really early onset dementia -- and I completely forgot about it. Well, now it's sorely overdue, but I finally remembered at least.
Dan Zettwoch is a friend of the RFT; he's the illustrator who has provided us with the rather wonderful "Amazing Facts...and Beyond! with Leon Beyond" comic strips over the years. He also happens to be a dedicated, dyed in the wool Cardinal fan, and his latest combination of ink, paper, and baseball magic is, well, Beyond Amazing.
See what I did there? That's why I'm such a highly sought-after commodity in the world of irritating internet sports columnists.
Anyway, Zettwoch has released a print commemorating the Cardinals' incredible victory in Game 6 of the World Series last October, and it is phenomenal. I've always been a big fan of Zettwoch's work in general -- his "Recovery of the Lost Trans-Atlantic Telegraph Cable, 1865" is one of my very favourite pieces of graphic art I've ever come across -- but he's truly outdone himself this time.
You can read all about the methodology and the concepts Zettwoch employed over at his blog; while you're there I would suggest you immediately order a copy of the print. I've already ordered two; one for myself and one for Father's Day. Oh, and for all of you out there thinking I've just ruined a Father's Day surprise, haha! Joke's on you, suckers! My dad couldn't care less about my writing! In fact, no one in my family bothers to read anything I write at all! So suck on that!
Hmm. Somehow taunting readers with my immediate family's complete indifference toward my work was not nearly as satisfying as I expected to be. Moving on...
Seriously, go and order this thing immediately. Dan is only producing a print run of 111 -- which, by the way, should prove his fandom to you if nothing else does -- and I can't imagine they're going to be around forever. This is too unique, and just plain too brilliant, for you not to have it hanging on your wall.