The St. Louis County Police force is now holding its own employees to a higher standard than it applies to the public vis-a-vis boozin' and cruisin'.

For a regular Joe behind the wheel in Missouri, the blood-alcohol content (BAC) limit is 0.08. For an off-duty county officer using his patrol car as a personal vehicle (which is legal and common), the BAC limit is now 0.04 -- the same limit that the federal government applies to commercial vehicles.

On that wild night, motorist Lucas Lamb of Greenfield, Illinois was cited for speeding on I-270 by an off-duty officer, spied the same cop soon thereafter at an MMA fight, filmed him drinking beer, then chased him in the parking lot with his video camera.

Lamb then complained to St. Louis County Police, who did an internal investigation.
In a letter obtained by Daily RFT, Col. Fitch wrote to Lamb on Friday that "a very thorough investigation" revealed that the officer was "operating within our guidelines" when he cited Lamb, and at the MMA fight, "did not operate the vehicle against any law or agency policy."

Fitch added: "Traffic violations are adjudicated in a court of law; not in exchange for the possibility of negative publicity in the community as you originally suggested prior to going to the media."

As for the speeding ticket, Lamb tells us his attorney was able to plead it down to a lesser violation. He thinks the department's new policy is a "step in the right direction."

"I'm happy they at least did something," he says, "rather than sweep it under the rug."

To read Fitch's letter to Lamb, click on the  image below: 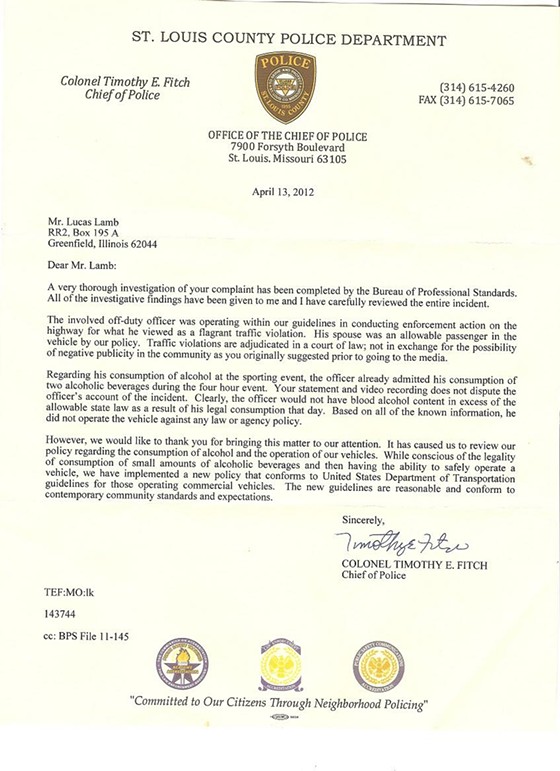