Meters In Meter: The Best Relay Names of the GO! St. Louis Marathon, In Verse 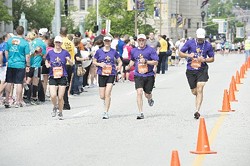 Judging by the number of beer-centric relay names that popped up in Sunday's GO! St. Louis Marathon, deciding to run as a foursome and coming up with a clever team name must be what particularly motivated people do after a weekend bender: e.g., Team Temporarily Impaired, Thought This Was a Beer Pong Tournament, Seemed Like a Good Idea At the Time.

Because we're somewhat more adept at writing poetry in meter than we are running in meters -- which is to say, not very -- here's a sort-of rhyming summary culled from the 500 teams of four who entered. (Click here for complete relay-team race results.) And hey, Post-Dispatch staff (we know that's you, teams Deadliners and Headliners): Journalists don't run, so knock it off. You're making us look bad over here. Though dibs on "Flatliners" for RFT's team name next year.

Meters In Meter: An Ode to Relay-Team Names They were runny (Mind Over Miles) and punny (Scrambled Legs and Achin')

Lauding the things they were running for (Carin' for Aaron, Will Run For Beer, Will Run for Cupcakes)

While fleeing the things they were running from (Running From the Law Students, Running From Bigfoot)

And some made you feel bad

But the best one