The NRA Conference Is About To Rock Your Face; And Not Just With Guns

Whoowee! The America Center was all a-bustle yesterday with fork lifts bleeping, booths erecting, gun-lovers registering, and Daily RFT trying not to have an over-stimulated panic attack.

Today begins the 2012 NRA Annual Meeting & Exhibits; last time this happened in St. Louis, more then 64,000 people showed up. Organizers are expecting 70,000+ this year, not to mention some GOP heavyweights (e.g., Mitt Romney) who will speechify tomorrow afternoon.

But perhaps the real stars of the show will be the firearms themselves! Got a weak spot for over-the-top assault rifles? NEMO, Nemesis or POF-USA will tempt you. Handguns? Try Glock or Smith & Wesson. What about shotguns? Make yourself comfortable at Bennelli or Beretta.

But that's not all. This NRA shindig has more than 500 booths spread across 340,000 square feet. Here's our mini-preview of some off-the-beaten-track vendors:

Ka-Bar Knives -- Their slogan is "Hardcore lives. Hardcore knives." It's gonna be hardcore, you guys.

Mil-Tac Knives -- They offer "Urban Survival Kits," which rest assured will go fast at this conference if/when downtown runs out of Coffee-mate.

Pyramid Air -- World's largest retailer of paintball guns. Yes you CAN afford it because you're living with your parents.

SABRE -- Their pepper spray has been "Making Grown Men Cry Since 1975." Cubs fans can relate.

Andrew's Custom Leather -- They boast that one of their holsters was worn by Sasha Baron Coen in "The Dictator" (not yet released). 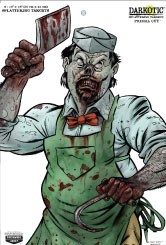 Birchwood Casey -- They sell "splattering" targets that all you to shoot at zombies and human-eating beasts. (See right)

CCW Breakaways -- They make clothing-concealed holsters, like DeNiro used in "Taxi Driver," only these are pleated khakis.

Conceal City -- Their "pager" holsters may conceal your gun, but will never conceal the fact that you look like you are still wearing a pager.

Packing In Pink -- This company offers girly firearm-related accessories. Their philosophy: "Just because I shoot like a man doesn't mean I have to look like one." Agreed.

The Buffalo Wool Company -- They use real bison wool to make hats and scarves and stuff.

African Elephant Hair Bracelets -- These are made with fake elephant hair, FYI.

Bond Arms -- They make really small guns; some are pink, for girl protection! Others are apparently used to shoot snakes. 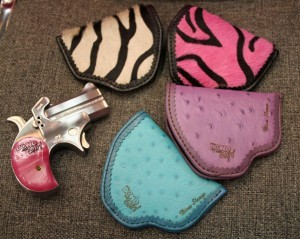