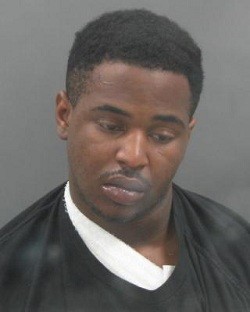 Tevin Martin, 21, is in custody today after fleeing police following a string of crimes Wednesday beginning in the 2800 block of Stoddard in St. Louis' JeffVanderLou Neighborhood. According to police, Martin and several other men were in a Chevy Impala on Stoddard Avenue around 2 p.m. April 11 when they were involved in a shootout with an unknown suspect that left two of Martin's companions with gunshot wounds.

The Impala then sped to Saint Louis University Hospital on Grand Avenue. As the two men who'd been struck (in the chest and buttocks) were exiting the vehicle, a St. Louis police officer at the hospital for other business, noticed a gun in the back seat next to Martin. The officer then ordered Martin to exit the vehicle. Instead, police say Martin jumped into the driver's seat and sped off -- but not before the officer shot him in the shoulder. (Police say Martin pointed the weapon at the officer prompting the shooting.)

Minutes later Martin crashed the Impala into another vehicle near Kingshighway and Forest Park Parkway and then slammed the car into a light pole at Lindell and Kingshighway and attempted to flee on foot before police arrested him. Police say they recovered two weapons -- one inside the vehicle and another nearby.

In 2009 Martin, of the 4600 of Labadie, pleaded guilty to resisting arrest, possession of marijuana and two counts of unlawful use of a weapon stemming from an October 2008 incident when Martin was 17 or 18 years old, according to court records.

He's now accused of two more weapons charges, two charges of leaving the scene of the accident and one charge of resisting arrest. Bail was set at $100,000.