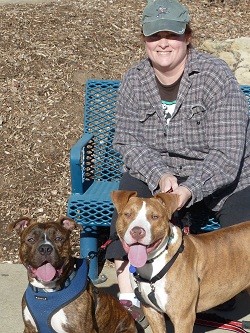 Last time we wrote about the dog "Our Little Girl" was back in October when Randy Grim's Stray Rescue discovered the dog and her litter mate, Our Little Boy, living in squalid conditions in north St. Louis.

The owner of the animals had tossed Our Little Boy in an alley Dumpster. The severely starved animal was clinging to life and would die hours later of malnourishment. Our Little Girl wasn't in much better shape, her ribs and hip bones protruding from under her dingy coat of fur.

A week after her rescue veterinarians at Stray Rescue performed emergency surgery to remove plastic and other garbage the dog had eaten when scavenging for food in the basement where she was kept -- the debris preventing her from digesting food.

Now, six months after her rescue, Our Little Girl is a robust version of her former self. 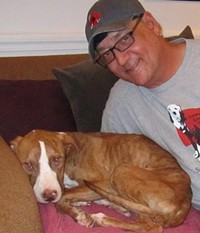 We know because her new guardian, Lynn Teller, contacted Daily RFT on Monday asking if we might have a larger copy of the photo (right) we took of Grim with Our Little Girl last fall. Sadly, we didn't. But not to worry too much. There are dozens of other photos of Our Little Girl out there. You can find a ton of them on the dog's Facebook page.

Yeah, that's right. The pooch is down with social media -- and socializing in general, says Teller.

"She's fantastic with other dogs and with kids," reports Teller who, with her husband Mike, adopted Our Little Girl in January and moved the animal into their Crestwood home.

Today Our Little Girl -- an American bulldog mix -- has gained 41 pounds to come in at a healthy 66 lbs. She's also found a new best friend in Cabbage, a two-year-old pit bull that the Tellers adopted from Stray Rescue earlier.

"The two dogs are inseparable," says Teller, who encourages others to check out Stray Rescue's canines when considering adopting a new dog. "My parents joke that Our Little Girl won the lottery when she found us, but I think we have. She and Cabbage are absolutely sweet dogs."